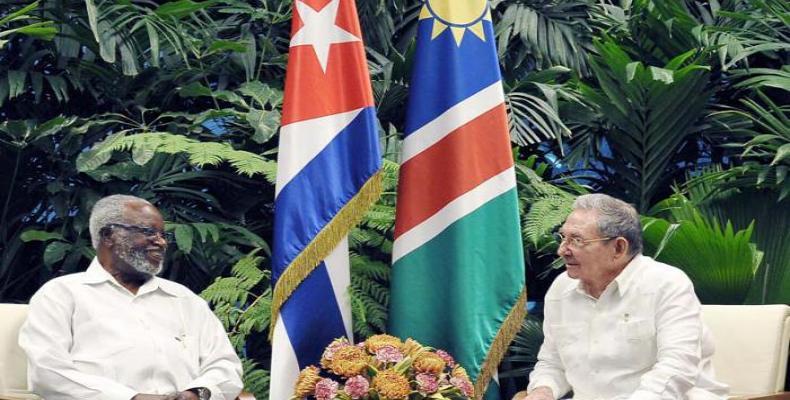 Havana, September 30 (RHC)-- Cuban President Raúl Castro held separate meetings Thursday here in Havana with his counterparts from Namibia, Sam Nujoma, and from Guinea-Bissau José Mário Vaz, as well as with the Prime Minister of the Kingdom of Lesotho, Pakalitha Bethuel Mosisili, all of whom are paying state visits to Cuba.

Raúl and Nujoma reviewed what they both described as the excellent state of relations between the governments and peoples of Cuba and Namibia. They also exchanged on international issues of mutual interest.

During his meeting with the Cuban president, the head of state of Guinea-Bissau acknowledged Cuba's role in his country's struggle for independence and also praised Cuba's cooperation with his country in sectors like health, education, sports and culture. The African dignitary made it clear that his visit here aims to further strengthen cooperation ties with the Caribbean state.

Also on Thursday, the Cuban president held talks with the prime minister of the Kingdom of Lesotho. President Raúl took the opportunity to reiterate Cuba's willingness to broaden and strengthen cooperation ties. They also touched on issues on the international arena.

Prior to his meeting with Raúl, the Lesotho premier visited Cuba's National Institute for Sports, Physical Education and Recreation, where he was received by Institute President Antonio Becali Garrido. During the exchange, Prime Minister Mosisili praised Cuba's cooperation with his country in the field of sports, specially the training in Cuban universities of young sports professionals and high-performance athletes from the Southern African country.