Talks between Colombian government and ELN rebels resume in Havana 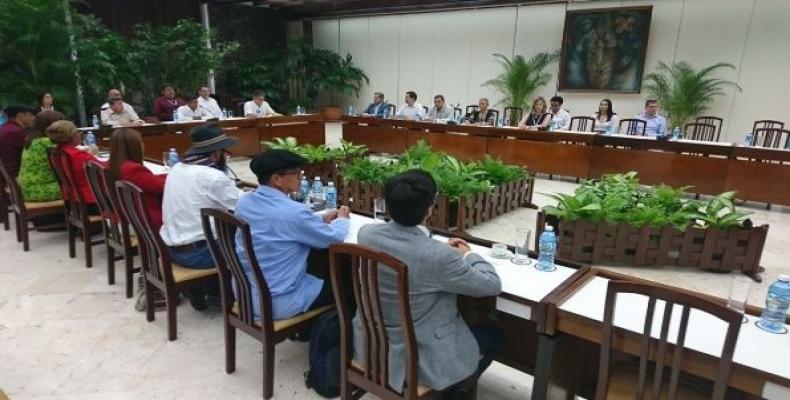 Havana, May 10 (RHC)-- The fifth round of talks between the Colombian government and the National Liberation Army (ELN) resumed Thursday in Havana.  The discussions follow in the footsteps of peace negotiations with the now-disarmed Revolutionary Armed Forces of Colombia (FARC), which also took place in Cuba.

The ELN negotiations had previously taken place in Quito, Ecuador, however, Ecuadorean President Lenin Moreno recently announced that he would be ending his country's role as mediator following violence along the country's border with Colombia.

The process is resuming just 20 days before Colombia's hotly contested presidential elections, in which candidate Ivan Duque, who represents the party of former president Alvaro Uribe is leading opinion polls.  Duque and Uribe have repeatedly stated they are opposed to the government's negotiations with ELN and agreement with FARC, which has transitioned into a political party called the Revolutionary Alternative Forces of the Commons.

Progressive presidential candidate Gustavo Petro, who is second in the polls, is a long-time advocate for peace with both groups.  Other candidates including Sergio Fajardo, German Vargas Lleras, and Humberto De La Calle have also said they would respect the peace agreement with FARC and have urged for the continuation of the discussions with ELN.  Colombian Senator Ivan Cepeda has also emphasized that the next government must continue dialogues and the peace processes with the ELN and FARC.

ELN leaders have said that they are ready to move forward with peace and hope to renegotiate a ceasefire with the government of President Juan Manuel Santos.