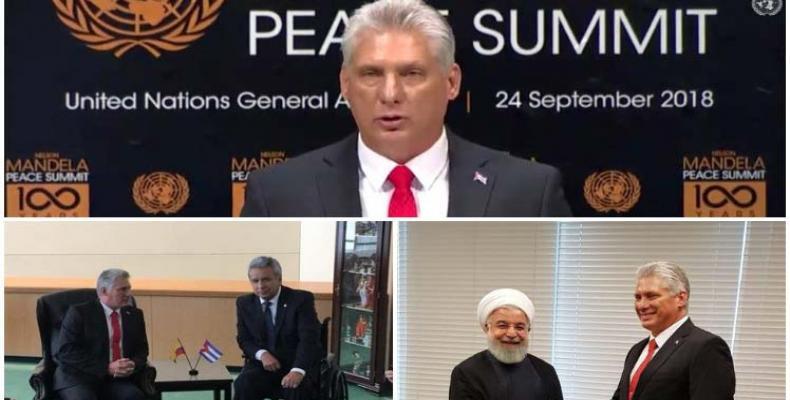 New York, September 24 (RHC)-- The president of Cuba, Miguel Diaz-Canel, held dialogues Monday with the leaders of Croatia, Mozambique, Andorra, Peru, Ecuador and Iran, on the occasion of the high-level segment underway at the UN General Assembly.

The Cuban head of state met with the Croatian President Kolinda Grabar-Kitarovia; his counterpart from Mozambique, Filipe Nyussi; the Presidents of Peru, Martín Vizcarra; and of Andorra, Antoni Mart.

The intense agenda of the Cuban president also included a meeting at the Cuban Mission to the UN with Republican and Democratic members of the United States Congress, who ratified their willingness to promote bilateral relations.

The event was held to mark the centennial of the outstanding South African hero.

The Cuban leader also met with executives of the Technology and Communications sector interested in the potentials offered by the island. Among the firms represented were Google, VaynerMedia, Connectify, Mapbox, McKinsey & Company, Virgin Group, AirBnB, Revolution, Twitter, Microsoft, Bloomberg and Cresta.

According to the list of speakers released by the UN, Diaz Canel will participate in the general debate of the 73rd session of the General Assembly on Wednesday. That day, September 26, 58 years ago, Cuban leader Fidel Castro's visited UN Headquarters for the first time.

Also on Wednesday Diaz-Canel will address an event commemorating the International Day for the Total Elimination of Nuclear Weapons.

Other meetings planned in the agenda of the Cuban head of state include a dialogue with the Secretary General of the UN, António Guterres.

As part of the work program, Díaz-Canel is expected to have some meetings with American businessmen, members of the Cuban community in the United States and members of the network of solidarity with the Caribbean nation.