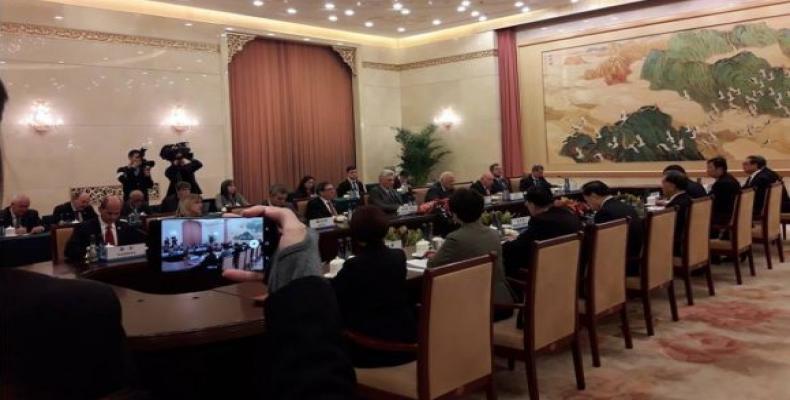 Beijing, November 7 (RHC)-- During his second day of an official visit to China, Cuban President Miguel Díaz-Canel met in Beijing with the head of the Standing Committee of the People's Political Consultative Conference, Wang Yang.  Following the meeting, the Cuban president affirmed that his current visit to the People's Republic of China was actually the continuation and consolidation of bilateral relations developed between the two countries over the past 58 years.

As part of his tour of the Asian country, the Cuban head of state visited the Technology Park of Changián and, upon his arrival on Tuesday, toured the First International Import Fair in Shanghai, where he visited the pavilion of Cuba and other Latin American countries.

The Cuban president also held a meeting with Cuban diplomats serving in China and Cuban students studying in Beijing.  During the meeting with the students, Diaz-Canel expressed interest in the living conditions of the young Cubans and noted that the student scholarships are the result of Cuba-China cooperation.  He said they were important because they expand the opportunities for training human resources and, consequently, guaranteeing professional development for the future.

China is the fourth stop of the Cuban president's tour of European and Asian countries, which has taken him to France, Russia and the Democratic People's Republic of Korea, and will continue in the coming days in Vietnam.