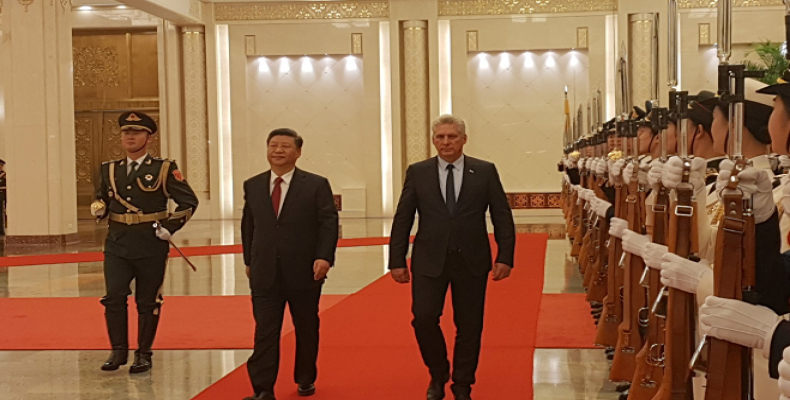 Before meeting with his Chinese counterpart, Diaz-Canel paid homage to the revolutionary leader Mao Zedong.  He wrote on Twitter: “In the morning #Cuba delegation paid tribute to Mao Zedong and the heroes of the Chinese people. Our commitment to these generations of heroes is to defend the construction of Socialism and strengthen relations between #Cuba and #China. #WeareCuba”

"Our commitment to these generations of heroes is to continue to uphold the banners of socialism and strengthen our already historic and indestructible relations of friendship and solidarity," said the president after signing the Mao Zedong Mausoleum visitors’ book.

After visiting the Mao Zedong museum, the Cuban leader met Li Zhanshu, Chairman of the Standing Committee of the National People’s Congress.  "I feel respect, admiration and affection for the Chinese people," Diaz-Canel said after meeting with Li Zhanshu.

The Cuban president left China and arrived in Hanoi, the Vietnamese capital, Thursday evening, local time.  On Friday, he will meet with the secretary general of the Communist Party of Vietnam and President Nguyen Phu Trong, Prime Minister Nguyen Xuan Phuc, and president of the National Assembly Nguyen Thi Kim Ngan.

On Saturday, he plans to travel to Ho Chi Minh City, the most populous city in Vietnam and its main economic, industrial and financial center.

Diaz-Canel is on an official tour to several foreign countries.  He has already visited France, Russia, North Korea, and China.  His last visit, following Vietnam, will be to Laos.