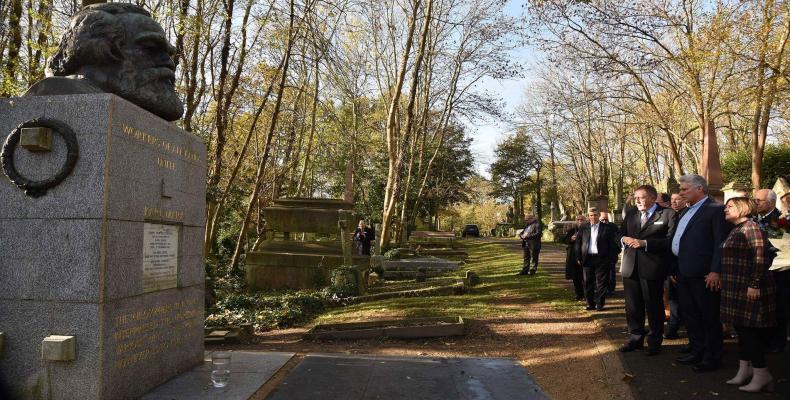 Havana, November 14 (RHC)-- Cuban President Miguel Diaz-Canel is fulfilling a packed agenda in London, where he paid tribute Wednesday to Karl Marx in Highgate Cemetery, in north London.   The Cuban leader placed a floral wreath at Marx's grave on the 200th anniversary of the birth and the 135th anniversary of the death of one of humanity's greatest thinkers of all time.

During his stay in London, the Cuban head of state has held meetings with British authorities, among them Philip Hammond, considered the second highest government official in the United Kingdom.

Referring to the meeting, Díaz-Canel wrote on his twitter account: “We had a meeting with Philippe Hammond, Chancellor of the United Kingdom, who visited Cuba as Secretary of State for Foreign Affairs in 2016.  It was the first official visit of a British chancellor to our country since 1958.”

Also on Twitter, the Cuban Ministry of Foreign Affairs disclosed that the Cuban president and Chancellor Hammond exchanged opinions on issues of the bilateral agenda.

During his stay in the capital of the United Kingdom, president Diaz-Canel met with UK Labor Party leader Jeremy Corbyn, Baroness of Balsidon Angela Smith and the coordinator of the All Party Parliamentary Group on Cuba in the House of Commons, Karen Lee.