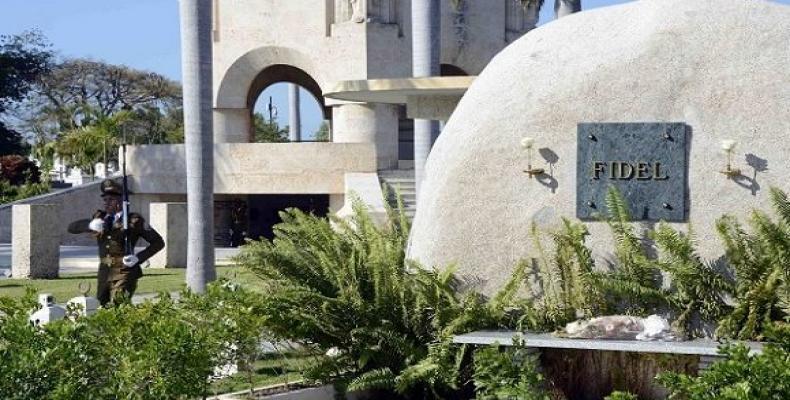 Havana, November 26 (RHC)-- Floral wreaths from First Secretary of the Communist Party of Cuba, Raúl Castro, and Cuban President Miguel Díaz-Canel, were laid before the monument where Fidel Castro's ashes rest in the Santa Ifigenia Cemetery in Santiago de Cuba on the second anniversary of Fidel's death.

The wreaths were placed by First Secretary of the Communist Party of Cuba Provincial Committee Lázaro Expósito, and Council of State Vice President and President of the Provincial Assembly of People's Power, Beatriz Johnson Urrutia.  Hundreds of Santiago residents and friends from around the world also came out to pay their respects to the Cuban leader.

In a Twitter post, Díaz-Canel recalled that the life, work and legacy of Fidel continue to live on, exemplified by the daily efforts of the Cuban people.

Tributes to Fidel were held across Cuba and throughout the world.  In Havana, students expressed their gratitude for the Comandante en Jefe's invaluable work and revolutionary example during a tribute gala Saturday night entitled “Siempre Fidel” or “Always Fidel” on the stairway of the University of Havana.