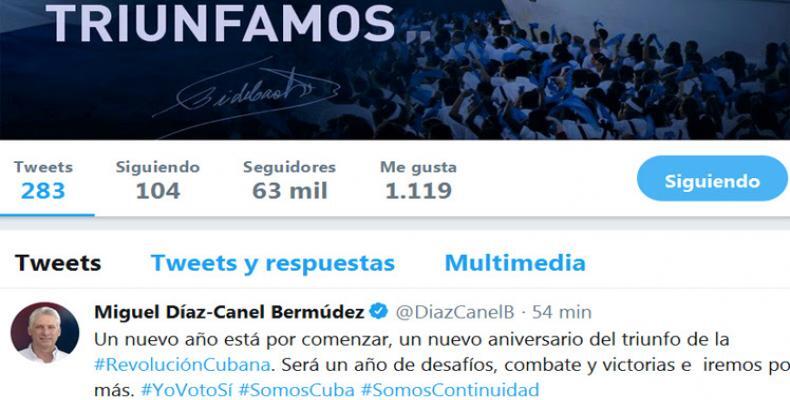 Havana, December 26 (RHC)-- Cuban President Miguel Diaz-Canel says 2019 will be a year of challenges and victories, a few days away from the celebration on the island of the 60th anniversary of the triumph of the Revolution.

"A new year is about to begin, a new anniversary of the triumph of the Cuban Revolution. It will be a year of challenges, battles and victories and we will go for more," he wrote on his Twitter account.

To the hashtags #SomosCuba and #SomosContinuidad, the president added # YoVotoSí, in reference to the popular referendum convened for February 24 on the new Constitution, which after being approved unanimously on December 22 by the National Assembly of Popular Power, it must be ratified at the polls by direct and secret ballot.

In his recent speech at the closing of the second ordinary session of the Parliament, Díaz-Canel mentioned challenges for next year such as economic development and the computerization of society, amid an escalation of hostility on the part of the current U.S. administration, with the reinforcement of the blockade.