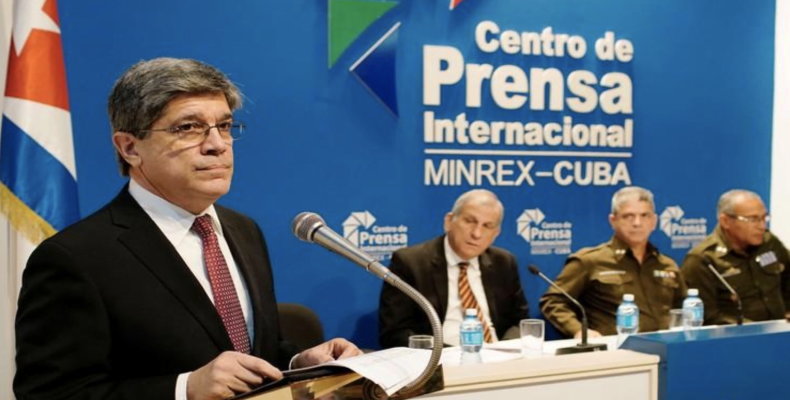 Havana, March 14 (RHC)—Cuba decried United States persistence in using the term attack to refer to the alleged health incidents reported by American diplomats in Havana, even though science does not support such accusations.

Addressing a press conference in Havana Thursday, the  General Director of  U.S. Affairs at the Cuban Foreign Ministry, Carlos Fernández de Cossío, reiterated that there is no evidence, theory, or research result attached to the science that justifies the use of the term “attack” that Washington continues to use publicly, although in official meetings it recognizes that there is no evidence to do so.

The diplomat  argued that the Cuban probe and the results of the exchanges of criteria with US authorities do not provide any basis for the hypothesis that there has been any attack.

Fernandez added that even the FBI investigation discarded the hypothesis of an acoustic, sonic,  ultrasonic or infrasonic attack, and fe also noted that in official exchanges with the Government of the United States, with the presence  of diplomatic and medical personnel in both cases, no evidence of attack has ever been produced.

The Cuban official stressed that this issue has been subject to political manipulation by Washington, with unfounded accusations that have served as a pretext to take measures that undermine bilateral relations in multiple areas with the reduction of diplomatic staff, the unjustified expulsion of Cuban diplomats from the United States, the issuance of a travel alert and the suspension of consular services in Havana.

Fernández de Cossío said that while Cuba did not doubt some diplomats had fallen ill, so far there was nothing to suggest this had not been due to a pre-existing condition, natural causes or even psychological suggestion.

Mitchell Valdes-Sosa, director of Cuba's Center for Neuroscience, said that a review of U.S. studies of the illnesses showed that some had begun before the start of the supposed phenomenon, and others consisted of a wide range of symptoms that hardly ever result from the same disease.