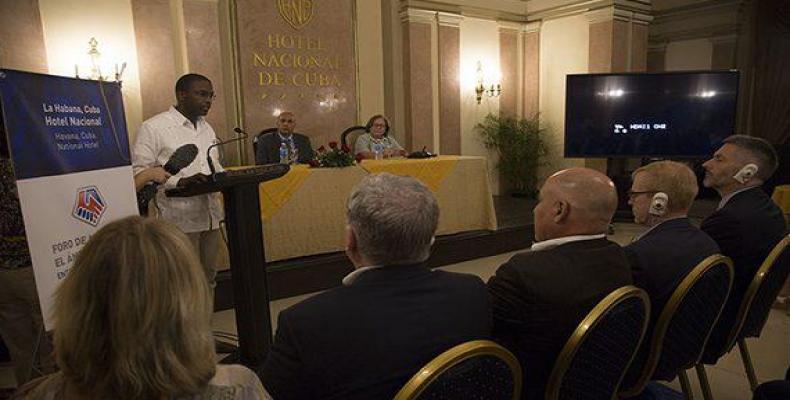 Havana, August 4 (RHC)—Information and Communication Technologies executives from Cuba and the United States identified projects with opportunities for both parties in a meeting held Wednesday in Havana’s Nacional Hotel, according to Ernesto Rodriguez Hernandez, Cuban Vice Minister of Communications.

Executives from US firms Liberty Latin America, Cable and Wireless Network, Transfer To,  and S-3, were on hand for the business forum and explored commercial possibilities on the island.

In statement to the press, the vice-minister highlighted the tightening of the economic, commercial and financial blockade of the United States against Cuba and the implementation of Title 3 of the Helms Burton Act.

Rodriguez Hernandez said that the limitation of the use of e-commerce platforms in both directions affects bilateral trade, and that the constant financial persecution, have greatly damaged business in the telecommunications sector.

He added that despite the current political climate, Cuba has more than a dozen agreements in force signed with U.S. companies in the ICT sector, which are beneficial to both parties, some of which were present in the Business Forum.

On the other hand, Rodriguez Hernandez said that the Internet task force group for Cuba, created by the Trump Administration has recommended actions aimed at hindering the process of computerization of society that is taking place in Cuba.

Likewise, the U.S. government continues to finance projects against the Cuban Revolution with subversive content that is transmitted through radio, television and social networks on the Internet.

In this regard, the director emphasized that Cuba supports the inalienable and sovereign right of every State to regulate the use and benefits of telecommunications in its territory, in accordance with universal practice and international agreements.

"We hope that the holding of this Forum will contribute to expanding trade relations in the ICT sector between Cuba and the United States," he said.

On Thursday, the visiting US executives from the ICT sector will visit the University of Computing Sciences and will hold a meeting at the Ministry of Foreign Affairs.