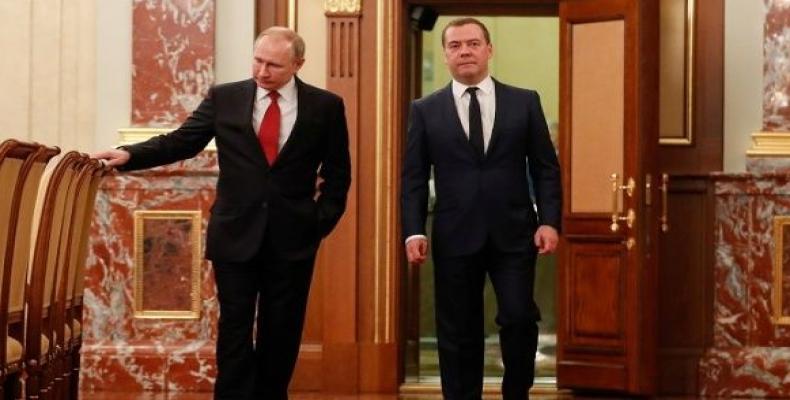 Moscow, January 16 (RHC)-- Russia's Prime Minister Dmitry Medvedev announced his resignation Wednesday, shortly after President Vladimir Putin delivered his annual State-of-the-Nation Address, in which he proposed a nationwide vote on sweeping changes in the Constitution that would shift power from the Presidency to the Chamber of Deputies.

Medvedev considered "correct" to present his resignation given that the constitutional amendments will modify the power balance between the Executive and the Legislative Branches.  “In this context, it is obvious that we must provide the president with a capability to make all decisions,” which are required to implement the proposed plan, the Prime Minister said.

For his part, Putin thanked Medvedev for his work at the helm of the Government and was "satisfied" with his management.  "Everything could not be done, but it is never possible to do everything," the Russian President said.

Medvedev assumed the leadership of the Government in May 2018, two months after Putin was re-elected as head of the Kremlin.  Previously, the outgoing Prime Minister held that position between 2012 and early 2018.  The Russian prime minister was harshly criticized by the parliamentary opposition and the citizens.  Only 36 percent of the population approved his management and their resignation was widely demanded in recent years.

Medvedev's ​​​​​career as president has been closely related to Putin, with whom he has worked closely since 1999, first as campaign manager, then as presidential administration chief and then as prime minister.