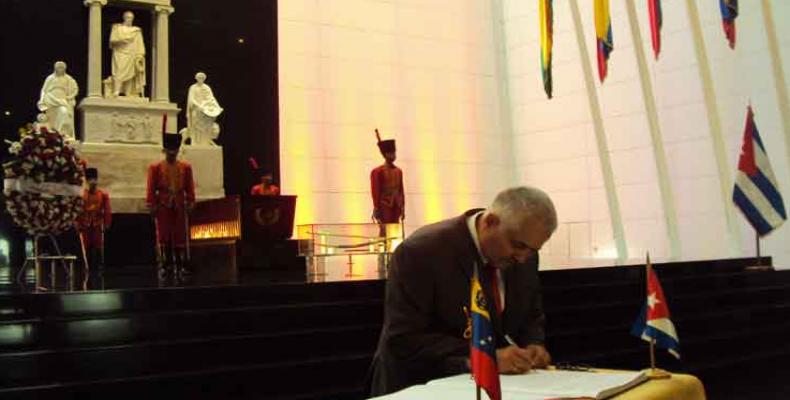 Caracas, October 9 (RHC)-- Cuba's new ambassador to Venezuela, Dagoberto Rodríguez, honored Simón Bolívar on Wednesday in front of the sarcophagus where the mortal remains of El Libertador rest in the National Pantheon, in Caracas.

During the ceremony, the diplomat placed a floral offering in homage to the father of the Venezuelan homeland and signed the visitors' book of the Liberator's Mausoleum.

Rodríguez, who presented his credentials to President Nicolás Maduro on Tuesday, expressed his joy of being in Venezuela following the ideals of José Martí, who pointed out that all Cubans arriving in this land must first pay tribute to the Liberator.

He pointed out that in many ways, there is a parallel between the blockade that this nation faces today and the one that Cuba has suffered for more than 60 years.

The diplomat added that the brotherly relationship between the two countries had strengthened thanks to the similar struggle against the imperial designs of a powerful, violent, and aggressive neighbor such as the governments that dominate the United States, which have no other aspiration than to occupy and destroy free and sovereign nations.

The Cuban diplomat also pointed out, 'the six decades of the Cuban Revolution have been of resistance to the aggressions of imperialism because of armed interventions and cruel economic war.

At the same time, he highlighted the resistance of the Cuban people who have known how to respond and resist while building a different society, based on social justice and equal opportunities for all its citizens.

Rodriguez also acknowledged and thanked the international solidarity that the island has received during these years.