Miguel Díaz-Canel: We need a Ministry of Labor without obstacles 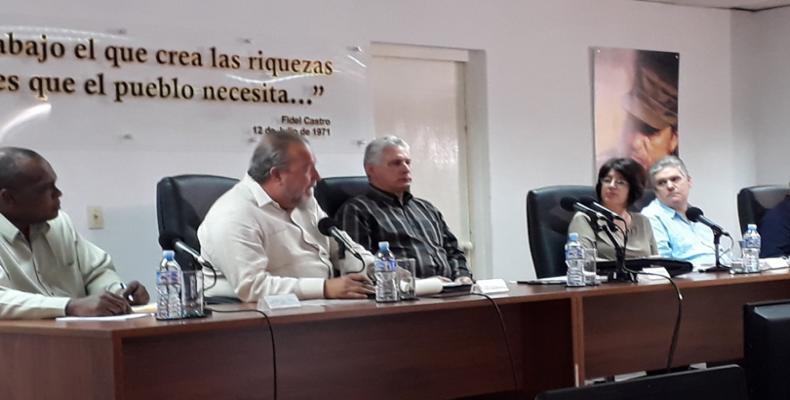 Havana, January 19 (RHC)-- Cuba has an unemployment rate of 1.2% of its active population. The figure was released during the Annual Stock-Taking Conference of the Ministry of Labor and Social Security held Saturday.

The President, Miguel Díaz-Canel Bermúdez, and the Prime Minister, Manuel Marrero Cruz, participated in the event.

Speaking in the plenary session, Diaz-Canel stressed the need to speed up decision-making and cited the recent wage increase in the budgeted sector as an example, a measure that, in his opinion, took too long to adopt.

"We spent our lives discussing the best time to do it, and we repeated a line that convinced no one. One of the things we are called upon to do in the 2020 plan is to unlock the economy of Cuba,"  the President said.

In this regard, he said that he had asked each ministry to set up an "obstacle bank" to resolve many situations that are currently hindering the nation's development.

"We cannot allow that if the state sector contributes the most to the economic dynamics of the country, it is where the wage factor moves more slowly. The private sector resolves this issue very quickly, so our dynamic is one of bureaucracy, we do much analysis, and although we have many criteria, we don't make things concrete," said the President.

After the leaders of the Ministry of Labor and Social Security recognized the elements that hinder their work and create bureaucracy and slowness, the Cuban President said that "we want and need a Ministry of Labor without obstacles."

Diaz-Canel also urged the leadership of the Ministry to work more efficiently in response to pressure from the U.S. government to stifle the country's economy and said that we are immersed in two cardinal processes: a vigorous legislative exercise and the discussion with workers of the economy plan.

He confirmed that in order to achieve the development objectives, it is essential to start from the basis of four principles: ideological work in all institutions, that cadres lead and are not satisfied with just carrying out tasks, developing cadres policy in depth and maintaining savings measures.

Among the work priorities for 2020,  Díaz-Canel listed the deployment of all the forms of management and ownership included in the Constitution, stimulating the socialist state enterprise as well as carrying out a reorganization of it.

He also mentioned generating new jobs, achieving a more comprehensive and multi-sectoral approach to the problems affecting all obstacles to employment policies, and improving working conditions and protection and hygiene in workplaces.