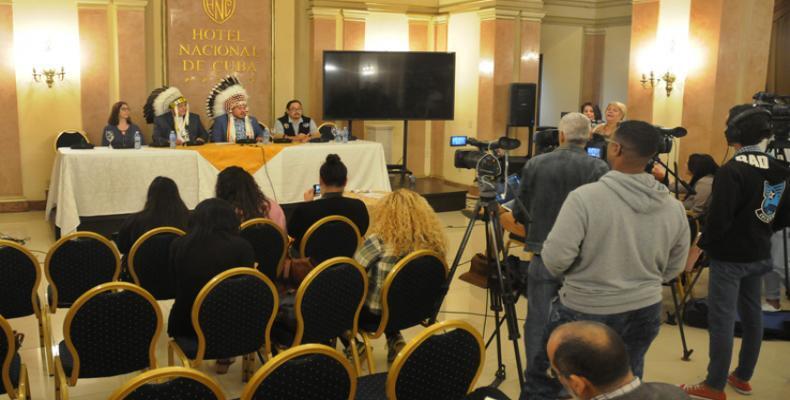 Havana, February 28 (RHC)--  A group of First Nations leaders from Canada is in  Cuba for an exploratory visit of the national health system, intending to establish cooperation in this sector in the future.

At Havana's  National Hotel, Jerry Daniels, the Grand Chief of the Southern Chiefs Organization in Manitoba, told the press of his interest on the Island sending health professionals to increase access to health care and solve the health problems affecting Canadian aboriginal peoples, where, he said, many citizens are discriminated against and do not receive the attention they deserve.

He also expressed the wish that young people from these remote Canadian areas could be trained at the Latin American School of Medicine on the Island and return to meet these health needs in Canada's First Nations.

"It makes me smile just to imagine the good impact that the arrival of hundreds of Cuban health professionals could have on our communities, even the most remote ones, to care for children, women, the elderly, the most vulnerable sectors," Jerry Daniels said.

"We want our communities to have health posts, hospitals, and other assistance centers, and I urge the other chiefs of the first nations to open up to this possibility of collaboration with Cuba, which we need so much," he said.

First Nation Chief Gambler Dave Ledoux praised the prestige and quality of Cuba's public health system, with a preventive, holistic and integrating model, and its medical collaboration, which, he stressed, is a reference in the world, recognized by the World Health Organization.

He said that the health philosophy of Cuba and its values are very similar to the model of traditional medicine of the indigenous peoples.