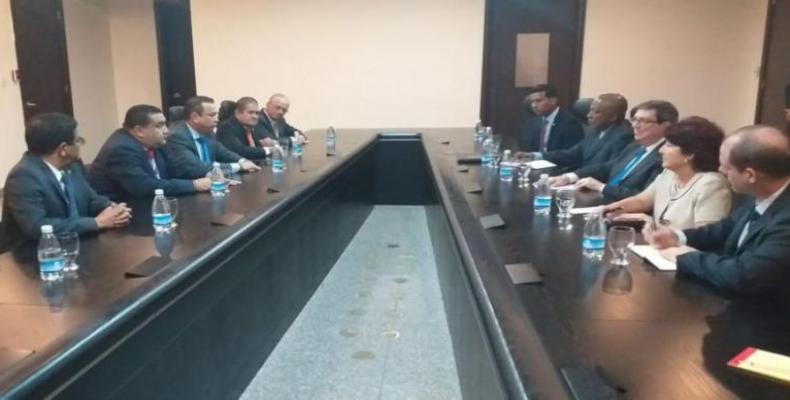 Panama City, March 6 (RHC)--  Foreign Minister Bruno Rodriguez -- currently in Panama -- has invited the President of the Panamanian Parliament, Marcos Castillero, to visit Cuba, to whom he also conveyed greetings from his Cuban counterpart, Esteban Lazo.

In a pleasant dialogue this Thursday, Castillero highlighted the historical links between both nations, among which he mentioned sport and education. At the same time, he referred to the recent creation of the parliamentary group of friendship with the largest of the Antilles.

For his part, Rodríguez also referred to the close ties, including cultural ones and thanked, on behalf of the Cuban people and government, Panama's permanent support in the battle for the elimination of the U.S. blockade against the island.

Rodriguez Parrilla also met on Thursday with members of the Martí Association of Cubans Residing in Panama.  He told them that migration is a pillar of the nation, as in the 19th century, when tobacco growers settled in Tampa and Key West supported Cuba's revolutionary struggle led by Jose Marti.

During their talks, the diplomat spoke about the efforts of the Caribbean nation to move forward amid the obstacles imposed by the U.S. government, and about the role that Cubans abroad can play in breaking the blockade and seeking ways to benefit the national economy.

He also referred to the interest of these communities in being an active part of the country's economic and social development, a topic that will be discussed at the IV Nation and Emigration Conference, to be held in Havana from April 8-10.

The top Cuban diplomat briefed participants on the event's organization, the participation of delegates, and web options to remotely voice criteria, concerns, and suggestions, before, during, and after the event.

As part of his visit to Panama, Bruno Rodríguez and his Panamanian counterpart, Alejandro Ferrer, are holding official talks this Friday at the historic Simón Bolívar Palace, the headquarters of the Foreign Ministry.