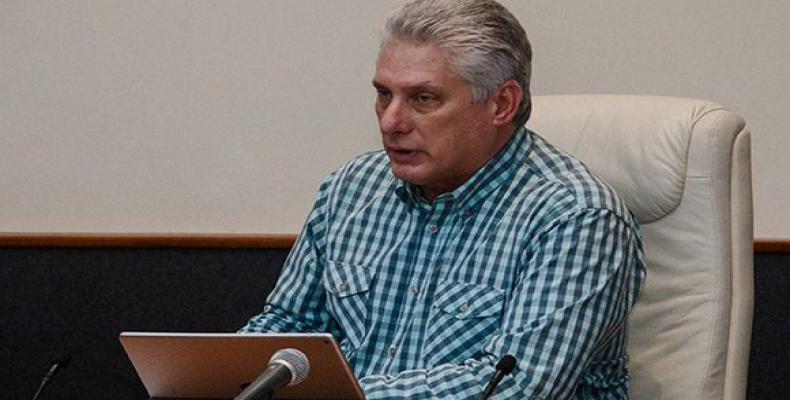 Havana, March 20 (RHC)-- The President of the Republic, Miguel Diaz-Canel Bermudez, led a meeting on Thursday with the participation of authorities of the provinces and the special municipality of Isle of Youth through video conference.

During the meeting, new measures were defined to reinforce the confrontation of COVID-19 in Cuba, where 16 cases have been confirmed.

The measures, which will be explained this Friday at the Round Table Radio and TV program, seek to strengthen the epidemiological surveillance of all travelers arriving in the country, as well as reinforcing other health measures aimed at minimizing the risk of transmission within the national territory.

These also include decisions on trade, gastronomy, transportation, labor, salary and social security treatment, and tax adjustments, among others.

Regarding the new measures, President Díaz-Canel stressed that the most important thing is the rigor, work, and behavior of everyone.

"The country, the Party, the Government and the institutions are responsible for preserving the life and health of our people, and also, as far as we can,  for being supportive and cooperative with those who need help in the world, because we have defended that Homeland is humanity," the President said.

He commented that there had been many manifestations of xenophobia, anger, discrimination, and selfishness in the world, and that is not our philosophy.

Amid a complicated situation, Diaz-Canel stressed that Cuba has to express the best values of its people, which are neither selfish or prone to mistreatment. "Consequently, we will continue to act," he said

Díaz-Canel assured that "what will lead to avoid contagion is not fear, but  working in coherence with the things we have set ourselves to do, with the things that are in the Plan."