Diaz-Canel says COVID-19 measures are working, but we can't be over confident 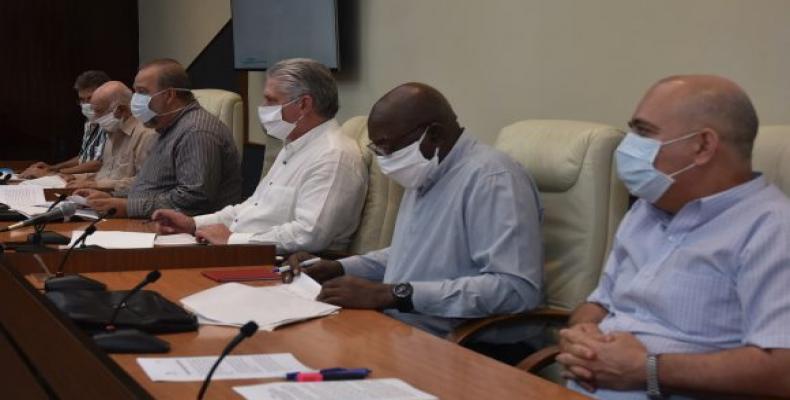 "The measures are producing results, but we cannot be over confident, we have not yet entered the most critical moment," he said as he led Monday the daily meeting to review the situation with the new coronavirus on the island.

Diaz-Canel considered that the country has to deal "in a very deliberate manner with the implementation and enforcement of the measures recently approved.  Among the tasks that give vitality to the nation, he mentioned food production and the sugar cane harvest.

The Head of State referred to the death of two Cubans, "we fought for their lives, but unfortunately the condition they were in prevented them from being saved".

He highlighted the more disciplined behavior of the population during the weekend.   On Sunday, the streets of Havana and other cities in the country were almost empty. Cues were more orderly, and he said: "That shows that when you make a call, when you explain what we are doing, people support you."

The Head of State referred to the importance of taking good care of medical personnel, providing them with needed protection, with time to rest, so that they do not feel overwhelmed by the situation.

The Minister of Public Health, José Angel Portal Miranda, updated the context with the new Coronavirus in Cuba. As of Monday, 170 cases had been confirmed: 143 Cubans and 27 foreigners. Except for the Isle of Youth and Mayabeque, all provinces have cases, with the highest numbers in Havana (43), Villa Clara (27), and Ciego de Avila (14).

The Minister stressed that the measure to keep all Cuban travelers arriving on the island in quarantine had been fully complied with, and the number has now reached 1,950, including 36 children and 1,915 adults. So far, 63 isolation centers have been set up in the country for this purpose, with a capacity of 9,284 beds.

Diaz -Canel also acknowledged the work by medical students who are participating in the screening underway in the communities to find people with respiratory symptoms and to maintain epidemiological surveillance.