Cuban president denounces silence about attack on embassy in Washington 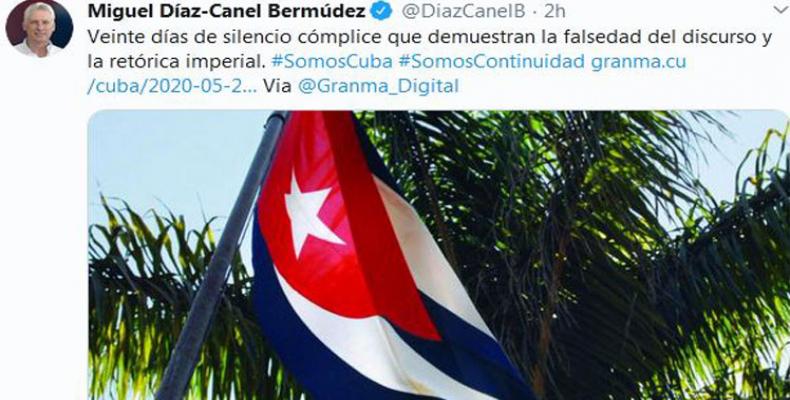 Havana, May 21 (RHC)-- Cuban President Miguel Díaz-Canel has denounced that the United States has yet to make a public statement about the attack against the island's embassy in that country, 20 days after the terrorist incident.

On his Twitter account, the Cuban president shared a journalistic work on the matter and stressed that this attitude of the U.S. administration demonstrates the falsity of the imperial discourse and rhetoric.

Last week, Cuban Foreign Minister Bruno Rodriguez publicly summoned the U.S. government to say what its motivations are for not making any statement about the attack on the diplomatic headquarters in Washington.

Rodriguez said that although there were signs of the possibility of an event of this nature, nothing was done to prevent it, which is why he called for a deeper investigation and transparency with the information.

He stated that the terrorist aggression against the Cuban mission is the direct result of an official policy of instigating hatred and violence against his country.

"We hope that the United States Government will at least try to match its anti-terrorist rhetoric and its policy of fighting international terrorism with its responsibilities in the face of this attack," the foreign minister stressed.

The Trump administration, however, remains silent about the attack and included Cuba on its list of countries that supposedly do not cooperate in the fight against terrorism.