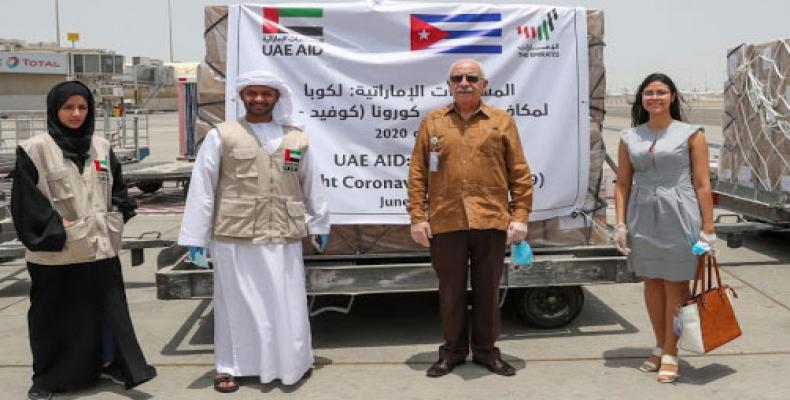 Abu Dhabi, June 4 (RHC)-- Eight tons of medical supplies donated by the United Arab Emirates (UAE) were sent to Cuba on Thursday to help the Caribbean nation's health personnel in the confrontation with COVID-19.

Roberto Blanco, Cuban ambassador to that Arab nation, thanked the government and people of the Emirates for their solidarity in these difficult moments of the fight against the new coronavirus pandemic, according to the Cubaminrex website.

The donation is another example of the very good ties of brotherhood between the two nations. We very much appreciate the relations between the two countries, which are getting stronger every day," Blanco said.

On this delivery of health supplies, Bader Abdulla Saeed Almatroshi, ambassador of the United Arab Emirates in Havana, said that the two peoples have forged strong ties in recent years, "in a show of cooperation that is helping our two countries overcome the VICD-19 crisis.

With today's aid delivery, UAE leaders are sending a message of support and solidarity to Cuba and its frontline workers, many of whom have volunteered to fight the virus in other countries with immense courage and resolve, the UAE diplomat added.

Cuba and the United Arab Emirates maintain diplomatic relations based on respect and collaboration, ties that were expanded with the opening of the embassy of the largest of the Antilles in Abu Dhabi on February 14, 2019.

This Asian nation is located on the Arabian Peninsula, along the Persian Gulf, and has a population of more than 9,575,000 inhabitants in an area of 83,000 square kilo