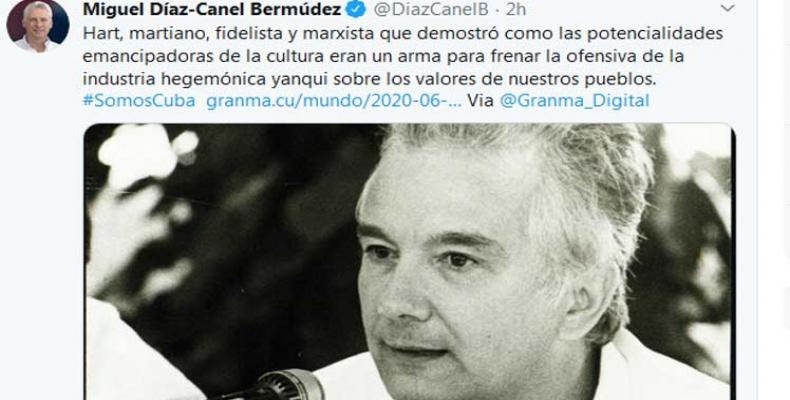 Havana, June 12 (RHC)-- Cuban President Miguel Díaz-Canel recalled the values of revolutionary and intellectual Armando Hart (1930-2017), on the occasion of his 90th birthday.

Through his account on the social network Twitter, the president wrote "Hart, a Martian, a Fidelist and a Marxist who demonstrated how the emancipatory potential of culture was a weapon to stop the offensive of the Yankee hegemonic industry on the values of our peoples.

While in another tweet, the dignitary recalled the 65th anniversary of the constitution of the national leadership of the July 26th Movement, which led the struggle against Fulgencio Batista's regime and to the revolutionary triumph.

Hart was a member of that Movement led by the leader of the Cuban Revolution, Fidel Castro, who later joined his intellectual work as Minister of Culture, President of the José Martí Cultural Society and the Office of the Martiano Program.

In an article this Friday in the daily newspaper Granma, the president of Casa de las Americas, Abel Prieto, said that the revolutionary left behind lessons that are totally valid today.  "He was an original and profound thinker and a full-blooded revolutionary.  He studied with rigor the elective tradition of Cuban thought, his ethical vocation and the trajectory that led him to Martí, first, and then to Fidel (Castro)," he said.

Various cultural institutions, such as the Center for Martí's Studies, planned actions to remember Hart, who was born on June 13, 1930.