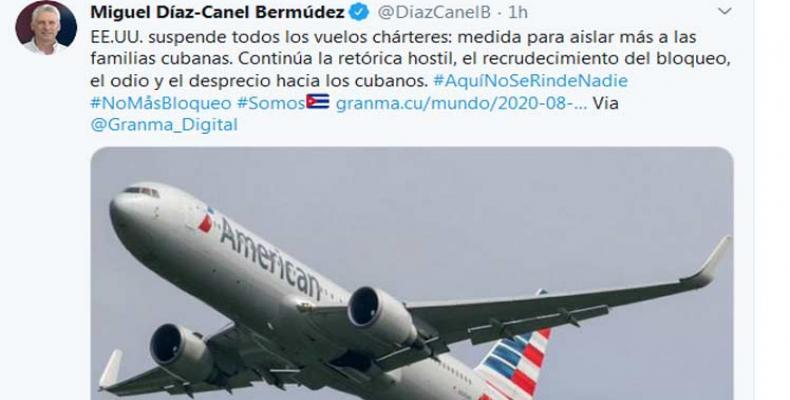 Havana, August 15 (RHC)-- Cuban President Miguel Diaz-Canel has rejected the hostile rhetoric of the United States regarding the suspension of private charter flights to Cuba.

On his Twitter account, the Cuban president stated: "The hostile rhetoric, the intensification of the blockade, the hatred and contempt towards Cubans continue."  Díaz-Canel said that the measure seeks to further isolate Cuban families -- accompanied with the labels AquíNoSeRindeNadie, NoMásBloqueo and SomosCuba.

Secretary of State Mike Pompeo announced a ban on private charter flights to the Caribbean nation, including to Havana (the only ones permitted for months).

However, the director general for the United States at the Cuban Foreign Ministry, Carlos Fernández de Cossío, said the action had little impact but was repugnant for playing on the concerns and needs for family contacts of Cubans on both sides of the Florida Straits.

The sanction, he added, seeks to satisfy the electoral political machine of South Florida and confirms the contempt of imperialism towards Cubans and Americans born in Cuba.

Communicated through the social network Twitter in the midst of global efforts to contain the spread of the COVID-19 pandemic, the measure will take effect on October 13th, and is added to others that reinforce the U.S. government's hostile policies.