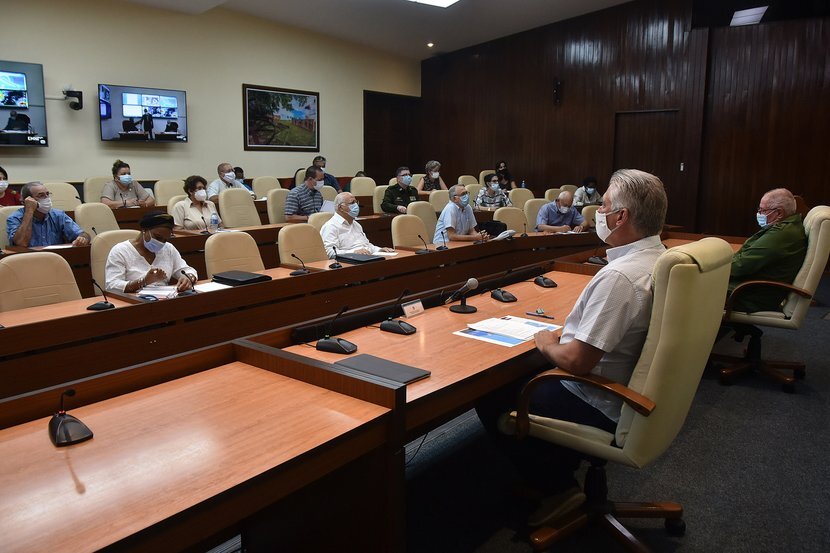 Havana, August 23 (RHC)-- As Tropical Storm Laura approached the Cuban territory, President Miguel Díaz-Canel Bermúdez reviewed the measures to protect the population and the resources of the economy.

As he led a National Defense Council meeting on Sunday, he heard from governors of the provinces from Guantanamo to Cienfuegos and the Council of Ministers the decisions taken to face the dangerous weather situation.

Diaz-Canel acknowledged the serious work done to specify and implement the measures planned for this stage.

The President warned that heavy rains would impact almost the entire national territory, from an event that may gain in organization and intensity in the next few hours.

The President stressed that "the priorities are to save lives and protect the population and its belongings, as well as the economic, social and state assets".

Diaz-Canel issued precise indications on prioritizing the use of electric generators in highly sensitive places such as hospitals and food processing centers, not allowing indiscipline in high-risk sites such as rivers and bridges.

He also insisted on avoiding the transfer of people from one province to another to prevent the spread of COVID-19 after Laura's passage.

He reiterated a fundamental issue during the meeting: the need for strict compliance with the hygienic-sanitary measures established to deal with the epidemic, especially in the evacuation centers.

"I am convinced that we will work together, with all our strength and talent. We are going to work as we have always done, with responsibility, with high standards, discipline, and avoiding sloppiness," the President said.