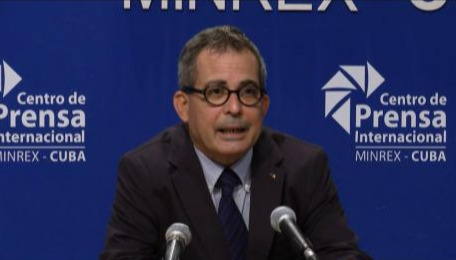 Cuba affirms that the efforts are continuing. (Photo: Cubaminrex)

Havana, October 7 (RHC)-- The general director of Press and Communications of the Ministry of Foreign Affairs of Cuba, Juan Antonio Fernández Palacios, has denied the information circulated in the early morning hours of Wednesday -- copied by several media and on the digital social networks -- about the alleged release of the two Cuban doctors kidnapped in Kenya, Assel Herrera Correa and Landy Rodríguez Hernández.

The director of the Ministry of Foreign Affairs assured that Cuban government authorities are following this issue with attention, which is attracting the greatest interest of our people, according to Cubaminrex.

Fernandez Palacios affirmed that the steps and great efforts to guarantee the liberation and safe return to the homeland of our two health collaborators are continuing.

In the early morning of April 12, 2019, the kidnapping of the Cuban specialists by alleged members of the radical Islamic group Al Shabab became known, as they were on their way to the Mandera hospital, near the border with Somalia.

The governments of Kenya and Cuba are working together to ensure the return of Herrera Correa, a specialist in General Comprehensive Medicine, from Las Tunas province; and Rodríguez Hernández, a specialist in Surgery from Villa Clara.