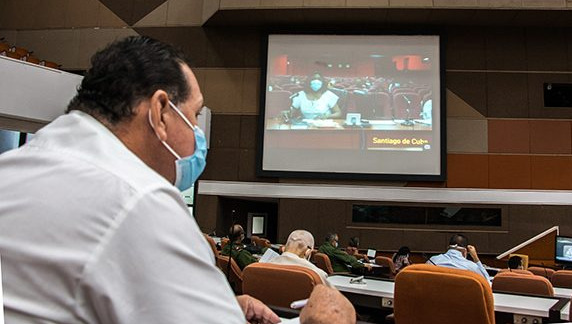 Havana, October 20 (RHC)-- Deputies to the National Assembly of the People's Power of Cuba (ANPP) are studying four bills that will be presented for approval in the ordinary session scheduled for October 28.

Gathered virtually, the lawmakers will learn about elements related to the Laws on the Foreign Service,  on the Organization and Functioning of the Council of Ministers, on the Revocation of Those Elected to the Organs of the People's Power, and on the President and Vice President of the Republic.

According to José Luis Toledo, president of the Constitutional and Legal Affairs Commission of the Cuban parliament, the four legislative proposals are aimed at strengthening the institutional organization of the State and its correspondence with the current Constitution.

The Foreign Service Bill is an eminently organic norm, through which all content related to the subject is hierarchical and organized in a single legal body, he added in a recent meeting with the press.

Meanwhile, the proposed Law on the Organization of the Council of Ministers will regulate the operation of the Government of the nation, and therefore provides for working procedures and powers of that body, among other elements.

Referring to the draft Law on the revocation of those elected to the organs of popular power, he said that it meets the need to update the existing legislation on the matter and adjust it to the new Magna Carta, which designed new structures and figures.

The proposal develops Article 101 of the Constitution of the Republic, referring to the rules of functioning of socialist democracy, based on a regime of guarantees and transparency.

On the other hand, the bill of the President and Vice President also regulates the operation of both positions, develops the powers established in the Constitution and provides for actions in case of substitution, among other aspects.