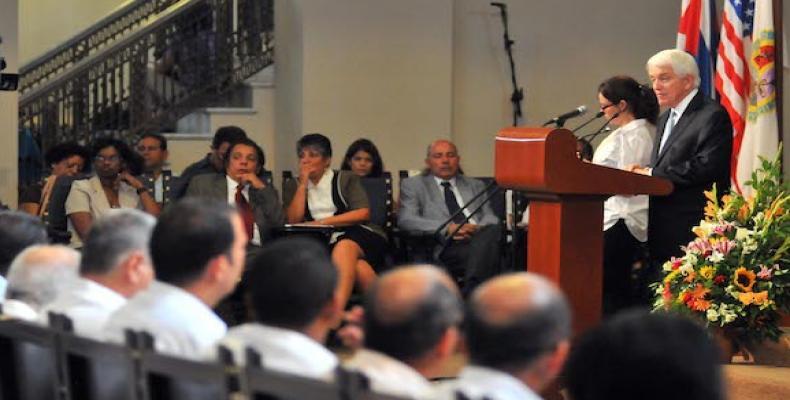 Havana, May 30 (RHC) -- It is past time to open a new chapter in U.S.-Cuba relations, said the president of the U.S. Chamber of Commerce Thomas Donohue, in a keynote lecture at the University of Havana on Thursday.

Donohue said that for years his institution has advocated the lifting of the U.S. economic, commercial and financial blockade of Cuba, and considered that this is the right moment for a new approach. The U.S. Chamber of Commerce has actively defended bilateral relations and trips between the two countries and expects to see more Americans visiting the island, because –- in his words -– “Cuba is a marvelous country.”

The visitor said that he and his delegation came to learn about the important changes taking place in Cuba and he will report about this reality to his government and suggest future actions. The idea is to consider how much US entrepreneurs can contribute and what real opportunities the new foreign investment law offers.

He described as “positive” the efforts of the non-state workers to participate in Cuban economy and he offered them the support of the Chamber of Commerce. Donohue recalled that in China and Vietnam, with political systems similar to Cuba, market-oriented economy has been successful.

Speaking about the new Mariel Special Development Zone, Donohue said that it may become a regional commercial hub. He reiterated the need to lift the commercial barriers between the two countries and to work for a new approach, which he said would take time and will depend on the mutual work of Washington and Havana.