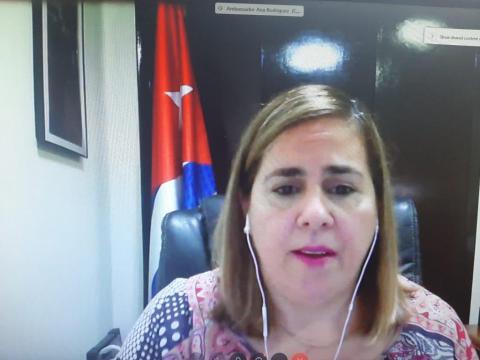 United Nations, February 16 (RHC)-- Cuba reaffirmed at the UN its support for strengthening the leading role of the General Assembly as the main normative, deliberative, policy-making, and representative body of the multilateral organization.

At the opening session of the Special Committee on the UN Charter, the Deputy Permanent Representative of Cuba to the United Nations, Ana Silvia Rodríguez, also invited to engage in a constructive and genuine dialogue that would allow progress to be made on long-standing issues on that body's agenda.

She also expressed the relevance of the Charter Committee's annual sessions in an international context in which some countries are recurrently trying to impose reinterpretations of the principles and purposes of that guiding document.

This is aimed at promoting interventionist political agendas at the expense of developing countries' integrity and sovereignty and in frank disrespect for the principles of International Law, she stressed.

The Cuban diplomat reiterated the validity and high legal value of the Manila Declaration on the peaceful settlement of international disputes as one of the main results of that Committee, almost 40 years after its adoption.

According to Rodriguez, all the actions developed by the Special Committee on the UN Charter demonstrate its remarkable role in the organization, despite the continuous attempts by some member states to obstruct its work.