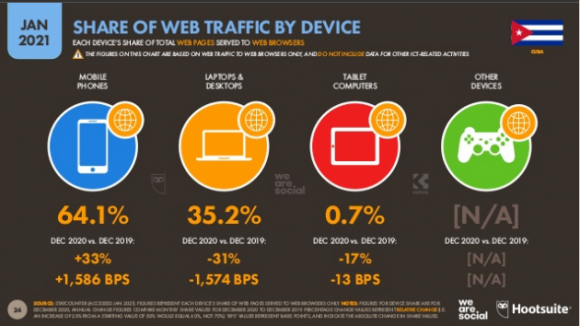 According to an in-depth report from Cubadebate website, in 2020, ETECSA enabled 816 radio bases to expand Long Term Evolution (LTE) coverage in 154 municipalities where 6.6 million people are subscribed to cell phone services.

A study by the platforms "We Are Social" and "Hootsuite" revealed that mobile browsing accounts for 64.1 percent of web traffic in Cuba, where there were 1.7 million people who used LTE networks last year.

In January of this year alone, there were 6.28 million social media users representing 55.5 percent of the country's population.

Currently, there are different projects to promote e-commerce, including the electronic payment of the basic food basket through the "Transfermovil" app.

Etecsa E-Commerce Director Julio Garcia said that some 1.4 million orders in virtual stores and 3.5 million electric bills were executed through this app in 2020.

There are 1,111 public WIFI sites and 674 Internet browsing rooms in the country. Currently, 189,000 Cubans have contracts for Internet connection from their homes.