Cuban scientists address the epidemic situation on the island 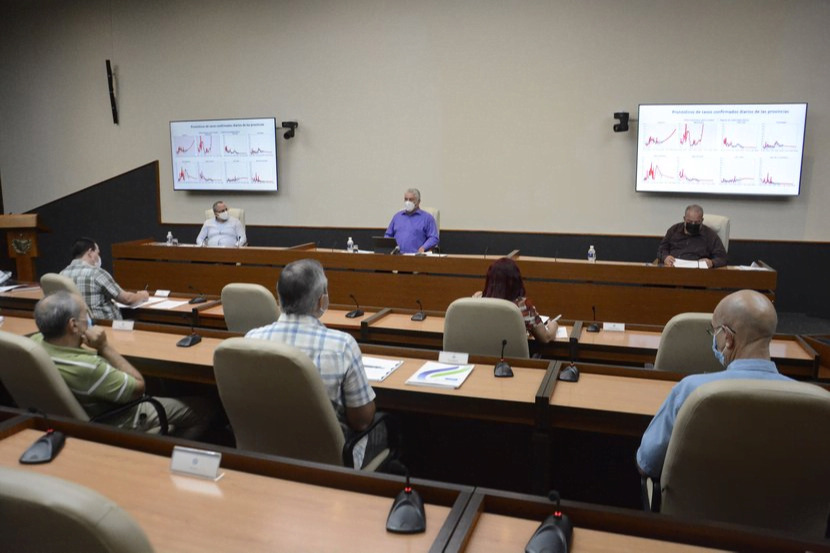 Havana, May 5 (RHC)-- Dr. Raúl Guinovart Díaz, Dean of the Faculty of Mathematics and Computer Science at the University of Havana, said that May also began marked by a fairly high average number of positive cases of the new coronavirus, including a high number of deaths.

He predicted that the numbers would continue to increase at the same rate for the coming weeks as we have been able to see these days.

Participating in the regular meeting of the Group of scientists and experts who lead the activities of science and technological innovation in the fight against COVID-19, with Miguel Díaz-Canel Bermúdez, Guinovart said that fortunately "there is a significant number of people who manage to overcome the disease, and already more than 94 percent of them quickly recover, supported,by the health protocols and in all medical care, which is followed to isolate confirmed cases.

The situation, the mathematician warned, continues to be complex for the country.

Based on a detailed presentation by Guinovart on the behavior of the epidemic in several provinces of the archipelago, the leader of the Communist Party of Cuba, Miguel Díaz-Canel Bermúdez, commented that the greatest problems are concentrated today in the provinces of Havana, Mayabeque, Matanzas, Santiago de Cuba; and to a lesser extent, in Granma.

He emphasized the need to take additional measures to carry out new analyses in the capital.

Díaz-Canel stressed that the disease has begun to behave differently in recent times. There are new elements that stimulate to think, analyze, and perhaps make new proposals on how to deal with things, especially in Havana, which is where we have more instability".

The meeting included the evaluation of the progress of the vaccine candidates developed by the Finlay Vaccine Institute.

In this regard, Dr. Vicente Vérez Bencomo, Director General of this institution, said that after more or less a year, the level of knowledge that the specialists have acquired regarding the three vaccines of the Soberana series is very important.