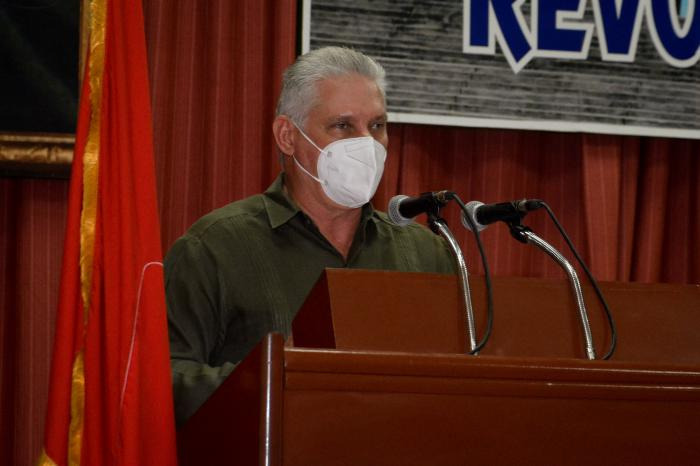 The First Secretary of its Central Committee, Miguel Díaz-Canel Bermúdez, together with the members of the Secretariat, arrived in Guantánamo on Thursday. Granma Photo.

Guantánamo, June 17 (RHC)- 60 days after the conclusion of the last Congress of the Communist Party of Cuba, the First Secretary of its Central Committee, Miguel Díaz-Canel Bermúdez, together with the members of the Secretariat, arrived in Guantánamo on Thursday to exchange experiences in the implementation of the follow-up strategy to the ideas, concepts, and guidelines of the event.

The meeting is the tenth held in the nation to promote a critical look at the internal and external functioning of the Party structures,  to transform ways of acting, and to demand accountability in a context marked by the COVID-19 pandemic and the reinforcement of the U.S. blockade against the Caribbean island..

The impact of the Ordering Task, the fight against social indiscipline, hoarding and speculative prices, the validity of further promoting the process of computerization of Guantanamo society, as well as accompanying the health intervention in groups and territories at risk, with Cuban vaccine candidates and the future mass vaccination program, were discussed.

In his closing remarks, Díaz-Canel insisted on the need of always denouncing the economic blockade as the main obstacle to national development and resisting, with the conviction that with intelligence and creativity, Cubans will be able to lead the country to the levels of development and spiritual and material satisfaction needed.

Also, on Thursday, the leader of the Communist Party of Cuba urged to take advantage of the potentialities in a visit to the neighboring province of Santiago de Cuba to face the challenges of development in that eastern territory and the country.

Speaking at a meeting with the militancy of that organization in the territory, he highlighted the role that the demand and active participation of the political vanguard must play in that effort.

Díaz-Canel also affirmed that the concepts and guidelines outlined in the 8th Congress contribute to face the ideological and economic battles that lie ahead for the province and the nation.

At the meeting, participants explained the actions initiated this year in favor of Cuba's economic and social development, especially in food production, and the current epidemiological situation of the territory, complicated in recent days with the increase of Covid-19 cases.