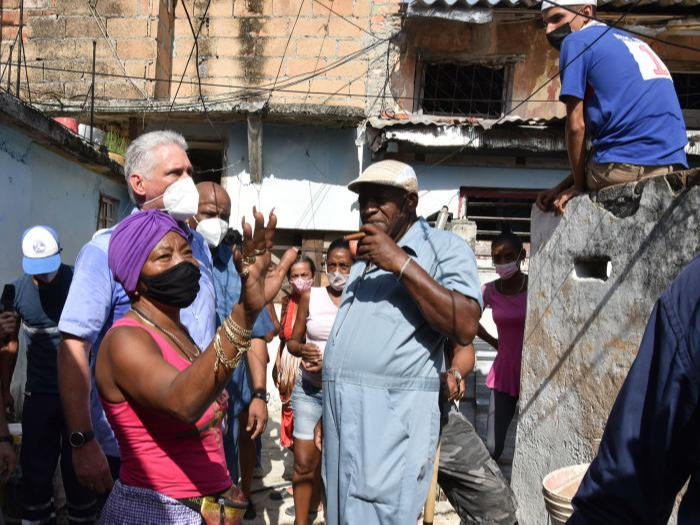 The President speaks with residents of Tamarindo Popular Council

Havana, September 4 (RHC)-- Cuban President Miguel Díaz-Canel held a dialogue on Friday with residents of the Tamarindo Popular Council, in the municipality of Diez de Octubre, one of the neighborhoods of Havana where a program of transformations is being implemented.

According to the Presidency Twitter account, the President arrived at the Margarita bunkhouse. There he was interested in the concerns, expectations, and participation of citizens in the changes in the community.

The Ministry of Agriculture is undertaking actions in the territory visible in medical offices, schools, kindergartens, markets, roads, parks, and the municipal library, the source said in another publication.

The plan started in Diez de Octubre for five communities out of the 216 that make up the territory.

In his exchange with the inhabitants and local leaders, Diaz-Canel insisted on the need to ensure that all the state institutions in the people's councils are not alien to the realities of the communities in which they are located".

On the other hand, he insisted on achieving practical work in channeling local problems to the Municipal Assembly and the Municipal Administration Council for them to act.

Decisions are made by the Municipal Assembly -Diaz-Canel stressed-, "and they have to flow with the participation of the people. Otherwise, the concept of people's power is broken, and we are just a few people in positions of leadership making decisions, without counting on the people. That is not how democracy works. We have to continue perfecting this".

The visit of the head of state is part of the tours to check the transformations in the vulnerable localities in an effort that gathers organizations, ministries, and the inhabitants.