Solar panels to  be made available in the residential sector 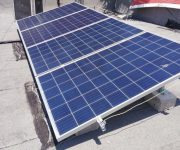 Havana, November 4 (RHC)—As part of the island's efforts to expand the use of renewable energy in the residential sector, as of November 4, COPEXTEL's divisions will begin selling 1 KWp solar photovoltaic systems to individuals.

According to the Cubadebate news website,  Rolando Gomez Rondon, general manager of the Ecosol Energia division, explained that these systems use solar panels and inverters that convert available solar energy into electricity for consumption in homes, businesses, and industries, generating significant savings on electricity bills.

During a press conference, the director said that these devices "...allow users to co-generate electricity or inject energy in parallel, either for self-consumption or for supply to the National Electricity grid".

As part of the policy for developing renewable sources and the efficient use of energy, COPEXTEL will be responsible for selling the solar photovoltaic systems to the residential sector.

According to Cubadebate, this is the first time that these systems are being sold to the population in national currency. At this stage, they will only be sold in Havana, although in the coming months, the service will be extended to the rest of the country.