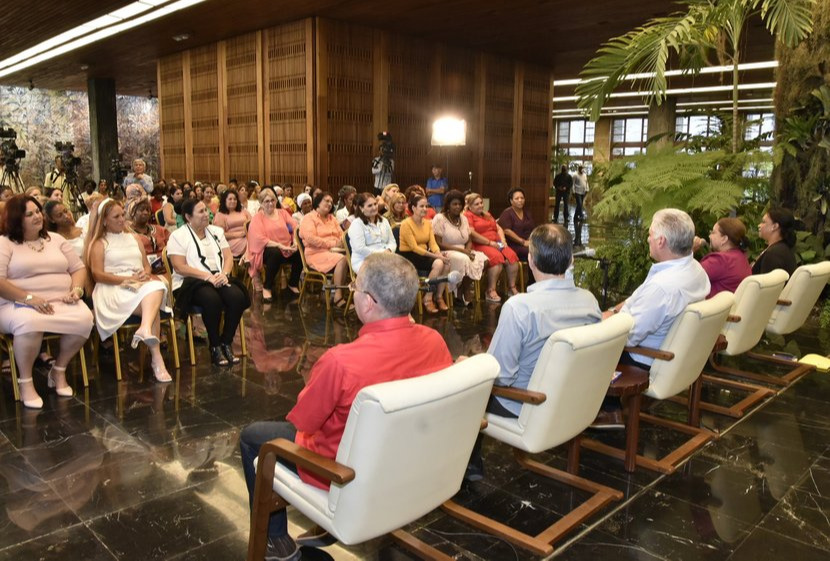 Havana, Jun 24 (RHC)-- Cuban President Miguel Díaz-Canel acknowledged on Friday that beyond the policies for the empowerment of women promoted by the Revolution, there are still debts, for which there is a national program.

In a meeting in Havana with over a hundred Cuban women, the President said that if one Revolution has done for women, it is this one, but there are still challenges.

"We recognize all that has been done, but we cannot remain idle or complacent; there are still many things to be done," said the head of State.

Díaz-Canel defined as inspiring the exchange with representatives of various sectors, in which issues related to gender violence and the need for attention to caregiving mothers were constant themes.

According to the Presidency’s Twitter feed,  the participants talked about the obstacles in agriculture and the formation of local development projects and micro, small or medium-sized enterprises.

The director of the TV series Calendario, Magda González Grau, insisted on the importance of dramatizations, an ideological tool that the Revolution has to modify behaviors and create reflections.

In this sense, she criticized programs that do not reflect the reality of the island.

First Officer Patricia Zamora García, representing the women on board a ship, told how she was able to study and work in a male-dominated profession.

However, she told the President that the main problem was gaining access to employment and promotion.

Others emphasized how the island's policies have enabled the development of sectors such as sports and winning titles in women's competitions.

In the opinion of young Yulaine Batista, unlike girls and women in other countries, "Cuban women are born empowered."

"I wanted to be a scientist, and today I work at the Immunoassay Center," a biotechnology company considered a leader in the country, she added.

In general, the participants discussed their experiences in local development projects and the challenges of the National Program for the Advancement of Women (PAM).

Lourdes Isabel Ruiz, who represented at the meeting the women caregivers, said that although economic support is important, there are other ways to collaborate, especially spiritual support and ways to work and improve themselves.

The National Program for Women, approved by presidential decree for its implementation in March last year, includes measures to empower women economically and guarantee all their rights.

According to experts, with the program, Cuba advances the State agenda for gender equality. It gives continuity to the inclusive work promoted by the Revolution since 1959.