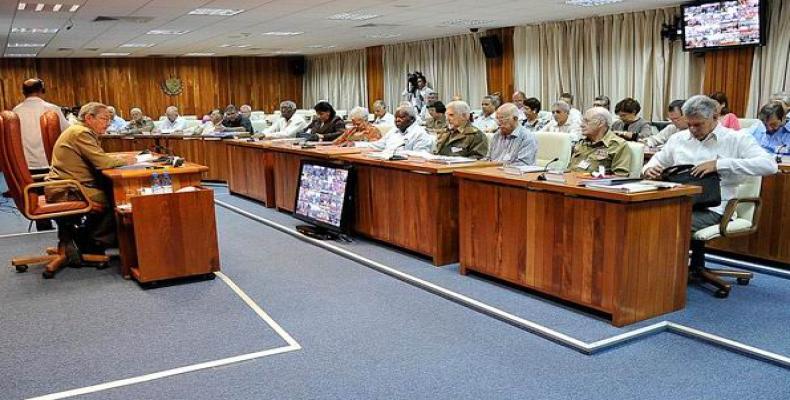 Havana, October 27 (RHC) -– Cuban President Raul Castro presided over a session of the Council of Ministers, which considered and adopted policies and measures related to the updating of the country´s economic model.

The issues on the agenda included the portfolio of opportunities for foreign investment, the aging of the Cuban population, the functions of entrepreneurial units, the registration of state facilities, the urban planning of Santiago de Cuba and accounting activity.

During the session that took place on Friday, Cuban Vice President Marino Murillo presented the portfolio of foreign investment, an aspect to be at the center of the upcoming International Trade Fair next month.

The portfolio approved at the session includes 246 projects to be developed with foreign capital, calculated at 8.7 billion dollars in crucial sectors, such as agriculture and food, construction, the pharmaceutical and biotechnological industry, renewable energy, and others. All these projects are to be implemented in all Cuban provinces.

Also high on the agenda was the aging of the Cuban demographic situation, about which vice-president Murillo said that over the next decades the country see a trend to a population aging and decrease.

This implies, he said, that if such trend is not reverted there will be more deaths than births by 2025 and 2027 with a decrease of the total population in all age groups, except for the segment of 60 years of age and above.

In this respect, the session adopted a policy aimed at encouraging fertility, attending to the growing needs of the older segment of the population, and promoting employment for all citizens able to work.

As to the inefficiencies presented in the foreign trade activity, Rodrigo Malmierca, minister in that sector, said that control has been at the center of attention in all entities. However, he noted even when not all irregularities taking place can be detected, control activity in companies and other entities has been reinforced.

Major problems being addressed include those related to inappropriate selection of providers; delayed contracts; incorrect manipulation of merchandise during commercialization; transportation and planning problems; lack of quality supervision and technological indiscipline.

The government session also analyzed and adopted measures related to the general urban planning for eastern Santiago de Cuba city; the registration of state facilities during the January-August period of time in 2014 and the improvement of the entrepreneurial performance and system at the Ministry of Finances and Prices.