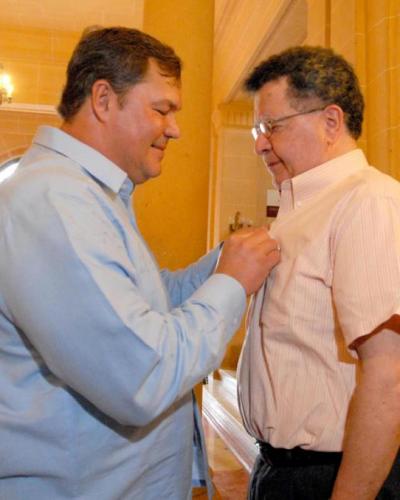 Havana, April 22 (RHC) -– U.S. activist Walter Tillow was awarded Cuba's Friendship Medal on Tuesday in recognition of his solidarity with the island and particularly his work for the release of the five Cuban anti-terrorist fighters who were imprisoned for years in the United States.

Tillow, a U.S. Communist Party member, received the medal granted by the Cuban Council of State for his active support of Cuba.

In his statements at the Havana Friendship Center, where the ceremony took place, the activist said that the release of five Cubans was the common cause of struggle for many supportive activists in dozens of countries.

Ramon Labañino, one of the five anti-terrorist Cubans attending the ceremony, thanked Tillow and his wife Kay for their support of their relatives during trips to Kentucky to visit him in prison, and he stressed that the Tillows represent the best of the U.S. people.

In statements to Prensa Latina news agency, Walter Tillow said he was optimistic about the normalization of U.S.-Cuba relations