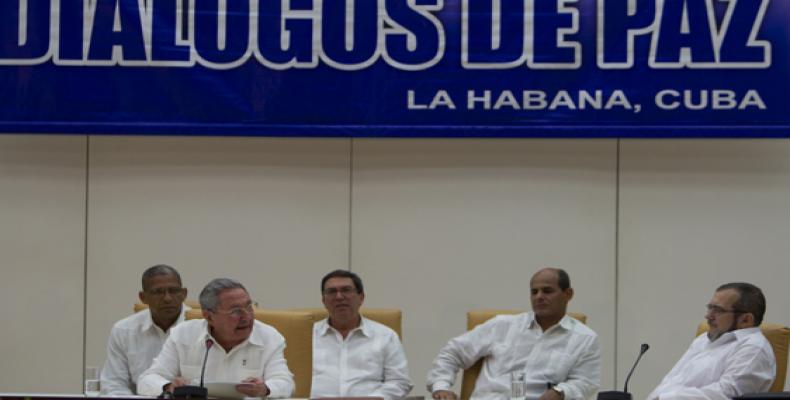 Havana, September 24 (RHC)-- Cuban President Raúl Castro described the newly reached accords on special jurisdiction for peace between the Colombian government and the Revolutionary Armed Forces of Colombia-People's Army (FARC-EP) as a major development in the ongoing efforts to build a lasting peace in the South American country.

Addressing the signing ceremony Wednesday during a round of peace talks in Havana, President Raul Castro emphasized that achieving peace in Colombia is not just possible, but that it is also indispensable for Colombia, for the region and the world.

Upon noting that many difficulties still lie ahead, the Cuban head of state expressed confidence that they will be duly overcome.

The Cuban leader congratulated Colombian President Juan Manuel Santos and FARC-EP leader Timoleón Jiménez for the significant advances made over three years of peace negotiations and reiterated Cuba's commitment to continue accompanying the negotiation process until a lasting peace is finally achieved in Colombia.

President Raúl Castro stressed that Cuba's contribution to the Colombian peace process has been, is and will always be based on the principles of absolute impartiality, profound respect for the positions defended by each side, discretion and firm, consistent support and solidarity.