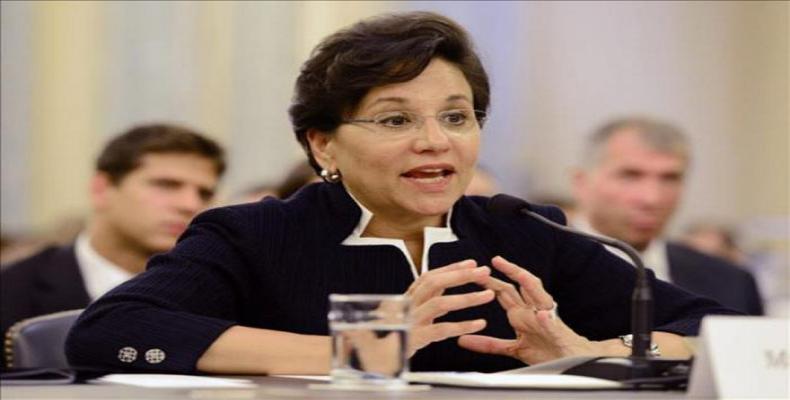 Havana, October 6 (RHC)-- As part of the process aimed at normalizing bilateral relations between Washington and Havana, U.S. Commerce Secretary Penny Pritzker is paying an official visit to the island beginning Tuesday.

Pritzker's agenda in Havana includes a meeting with Foreign Trade and Investment Minister Rodrigo Malmierca and visits to places of cultural, historic and economic interest, such as the Special Development Zone at western Mariel Harbor.

This is the second visit to Cuba of a member of the Barack Obama cabinet to Cuba, after U.S. Secretary of State John Kerry attended the flag-raising ceremony at the newly-opened U.S. embassy in Havana in August.

The U.S. commerce secretary will attend a meeting on Wednesday, October 7th, between officials from the U.S. Departments of Commerce, Treasury and representatives of several Cuban ministries and companies in order to discuss the most recent steps taken by the Obama administration to modify some of the aspects of the U.S. economic blockade against Cuba.

Some of those steps eliminated trade and travel to Cuba restrictions by U.S. citizens under the established 12 categories; however, the travel-ban on Cuba for U.S. citizens as tourists was not eliminated, since it will require congressional approval. Other critical aspects of the U.S. blockade were not touched at all, such as the possibility that Cuba can use U.S. dollars in international transactions or to trade with subsidiaries of U.S. companies based in third countries.

Currently, if Cuba purchases goods from U.S. companies it has to pay in cash and upfront as established by the regulations in force.

Cuba has described the most recent steps as positive, al though there is still a long way to go to dismount other aspects of the U.S. blockade. It is in this context that Penny Pritzker will exchange with Cuban authorities on ways for the two countries to jointly advance.