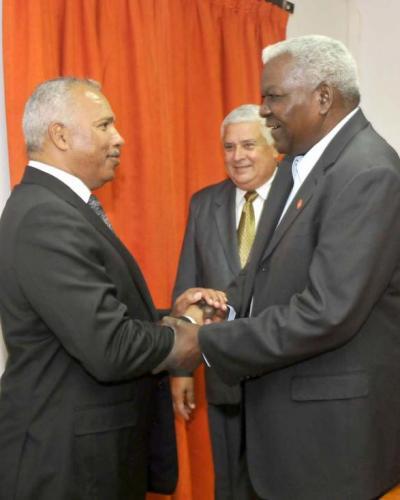 Havana, November 5 (RHC)-- Cuban Parliament President Esteban Lazo received Peter Foster, his counterpart from the Caribbean island nation of Saint Lucia, which he described as a sister nation that shares excellent and historic relations with Cuba.

According to this morning's edition of Granma newspaper, during the meeting the Cuban Parliament president thanked Saint Lucia for its support at the UN of the Cuban resolution demanding the lifting of the U.S. economic blockade of his country.

Meanwhile, the president of Saint Lucia´s Assembly recalled that most Saint Lucian doctors have graduated in Cuba and he expressed interest in the island's pharmaceutical products to fight diabetes, a disease affecting a large number of Saint Lucians.

Peter Foster has been visiting Cuba since Monday and will depart on Saturday after touring centers of interest in Havana and Matanzas provinces.