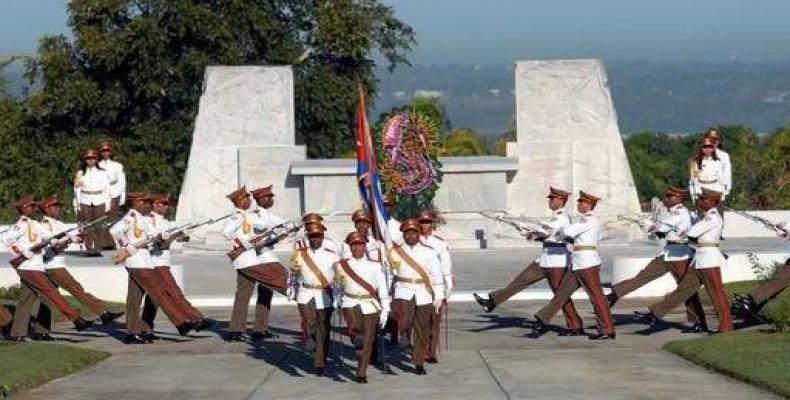 Artemisa, December 7 (RHC)-- A political ceremony and military parade took place Monday at the El Cacahual Mausoleum in the western province of Artemisa to mark the 119th anniversary of the death in combat of Cuban independence hero, General Antonio Maceo and his aide, Captain Francisco 'Panchito' Gómez Toro.

Antonio Maceo was second-in-command of the Cuban Army of Independence in the 19th century struggle against Spanish colonialism.

The 'Bronze Titan', as his fellow mambises (liberation fighters) and today's Cubans fondly call Maceo, is best known internationally for his strong opposition to the signing of the Pact of Zanjon, which ended the Ten Years' War in Cuba.

Maceo and other mambises met with Spanish General Martínez-Campos on March 15th, 1878, to discuss the peace terms, arguing that no peace could be achieved if none of the objectives of the war had been accomplished, chiefly the abolition of slavery in Cuba and Cuban independence.

The only immediate benefit offered by Spain was amnesty for those involved in the conflict and liberty for Black soldiers who had fought against Spain.

Maceo did not recognize the treaty as valid and did not adhere to the proposed amnesty. This meeting became known as the Protest of Baraguá ("Protesta de Baraguá").

Spaniards referred to Maceo as the "Greater Lion" (El Leon mayor) and considered him one of the most noteworthy military leaders in 19th century Latin America.

Monday's political ceremony and military parade at El Cacahual Mausoleum was to also pay tribute to Communist leader, the late Blas Roca Calderío, as well as to Cuban internationalist fighters, who gave their lives fighting for the liberation of Angola and Ethiopia. Their mortal remains are kept at the mausoleum together with those of Maceo and Panchito Gómez Toro.