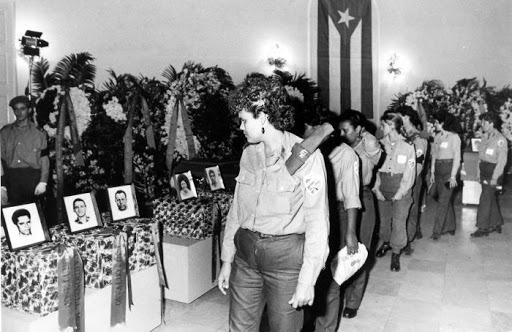 Operation Tribute, as it was called, involved the return home on December 7 of the remains of the more than two thousand Cuban combatants who died in internationalist missions in Africa.

Havana, December 7 (RHC)-- On the 31st anniversary of the return to Cuba of the mortal remains of those who gave their lives for the independence of Angola, the Cuban people do not forget and honor the martyrs.

Operation Tribute, as it was called, involved the return home on December 7 of the remains of the more than two thousand Cuban combatants who died in internationalist missions in Africa.

On November 5, 1975, at the request of the Popular Movement for the Liberation of Angola (MPLA) the Cuban government decided to support that nation directly, thus initiating Operation Carlota.

Cuba's contribution helped preserve that country's independence and influenced the liberation of Namibia and the end of the apartheid regime in South Africa.

Due to the conditions of the war, it was impossible to return the bodies until December 1989.

Carried on the shoulders of the people, they were buried in the pantheons of the fallen throughout the country, on a day that coincided with the 93rd anniversary of the death in combat of Cuba's independence hero Antonio Maceo.

The central ceremony took place that December 7 at the Mausoleum of General Antonio Maceo in El Cacahual, Havana.

In the farewell to the fallen in the deed, the historical leader described Cuba's participation in African nations' liberation struggles as a 'true feat of our people' and said that 'few times had a page of altruism and international solidarity been written like this.'

December 7 would become a day of remembrance for all Cubans who gave their lives not only in defense of their homeland but also of humanity. In this way, patriotism and internationalism, two of the most beautiful values that man has been able to create, will be united forever in the history of Cuba,' Fiel stressed.