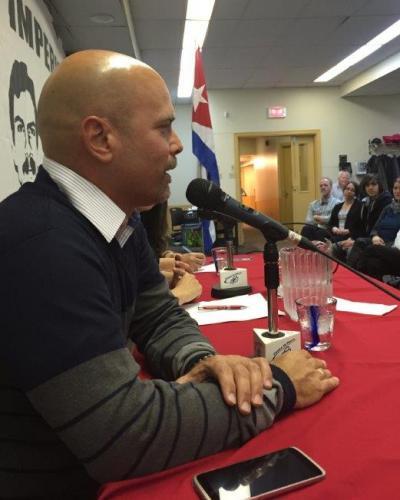 Havana, May 9 (RHC-ACN) The Soviet victory in the Great War (1941-1945) against Nazism inspired six Cuban heroes who withstood imprisonment in foreign countries.

The statement was made in Moscow by Gerardo Hernandez, one of the five Cuban anti-terrorist fighters who served long, unfair imprisonment in the U.S. after they infiltrated terrorist organizations that planned attacks against the Cuban nation and people.

The Cuban Five, Gerardo Hernandez, Antonio Guerrero, Rene Gonzalez, Ramon Labanino and Fernando Gonzalez, along with Colonel Orlando Cardoso, who also served imprisonment in Africa, were invited by the Russian lower chamber of parliament or Duma to the military parade on Moscow's Red Square to mark the 71st anniversary of the Victory over Fascism.

“It is a real privilege to attend such important commemorations, in honor of those who made big sacrifices to make the Victory Day a reality,” said Hernandez, who never yielded despite being given two life terms plus 15 years in a U.S. jail.

He said that during all the 16 years that he and his four compatriots served in U.S. prisons, they received countless gestures of support and solidarity from the Russian people. “The world solidarity not only contributed to our release, but also helped us every single day and gave us strength to resist.”

During their four-day stay in Russia, the Cuban Five and Colonel Orlando Cardoso will fulfill a packed agenda that includes a meeting with Foreign Minister Serguei Lavrov on Tuesday.

The will also meet with parliamentarians, members of the Cuba Solidarity committee and Cuban diplomats in Moscow.

In February 2015, President Raul Castro bestowed the Hero of the Republic of Cuba medal on the Cuban Five, previously the distinction was also given to Colonel Cardoso, who was wounded during an internationalist mission in Ethiopia and was submitted to solitary confinement in a Somali prison for 10 years.