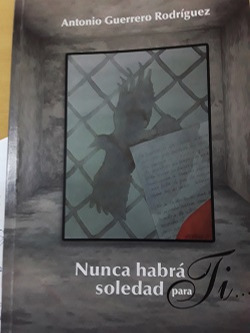 Ciego de Avila, December 20 (RHC)-- The book ‘Nunca habrá soledad para ti’, written by Hero of the Republic of Cuba Antonio Guerrero (Tony) was presented by its author over the weekend in the central province of Ciego de Ávila.

The visit was as part of activities on the 7th anniversary of Tony’s return to Cuba, on December 17th, 2014, after serving 15 years of unjust imprisonment in the United States for defending his nation and people against terrorism.

Copies of the new book will be up for sale during the upcoming 30th edition of the International Book Fair Cuba 2022, set for February in Havana.

On hand for the presentation in Ciego de Avila were also heroes of the Republic of Cuba Ramón Labañino and René González, who together with Tony, Gerardo Hernández and Fernando González were known worldwide as the Cuban Five.

Tony explained that the book is a compilation of the correspondence that he maintained with his mother Mirtha Rodríguez over the first 17 months that he and his four compatriots spent in solitary confinement in the hole at the Federal Detentions Center in Miami.

He explained that the first letter is dated October 10th, 1999, roughly one month after the Five’s arrest in Miami. Tony said that from then on, he received a letter from his mother almost every Sunday.

‘Personally, poetry and the letters that I exchanged with my mother became a defense mechanism and a way to express myself, despite the isolation,’ Tony said.

About the book, Cuban Five member René González said that the letters compiled in Tony’s work reflect the essence of what they went through. He added that while each one of them dealt with that horrible situation in their own way, they all drew inspiration from leader Fidel Castro and his self-defense speech in the trial after the 1953 attack on the Moncada barracks in Santiago de Cuba, which has gone down in history as ‘History will Absolve Me’.