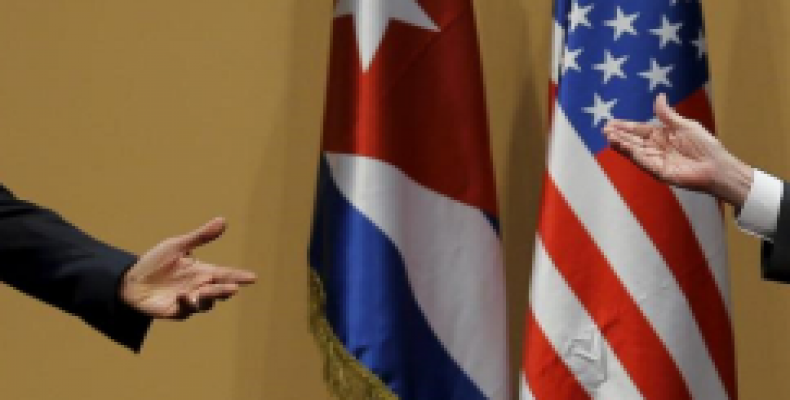 Havana, May 17 (RHC)-- Josefina Vidal, General Director for the United States at the Cuban Foreign Ministry, described as “productive” the Third Meeting of the Cuba-U.S. Bilateral Commission, held Monday in the Cuban capital.

During a press conference following the meeting, Vidal, who led the Cuban delegation, said that the two sides reviewed the implementation of the agreements adopted at the second meeting of the Commission, as well as the results achieved over the last six months regarding the process of normalization of Cuba-U.S. relations.

According to a statement issued by the Cuban Foreign Ministry, during the meeting both delegations took note of the increase in official visits in both directions, which had at its peak President Barack Obama's visit to Havana in March 2016; the technical meetings held to discuss issues of common interest; and the bilateral instruments signed, a total of nine, which seek to expand mutually beneficial cooperation between our two countries.

The Cuban foreign ministry asserted, though, that the continued enforcement of the U.S. blockade against Cuba has prevented similar advances in bilateral economic ties. It adds that despite the  steps taken, there are still significant restrictions that limit U.S. exports to Cuba, while very few Cuban products can be exported to the United States. It notes also that U.S. investments in Cuba are limited only to the telecommunications sector and that there are no normal banking relations between Havana and Washington.

Also during Monday's meeting of the Cuba-U.S. Bilateral Commission in Havana, the two sides defined joint actions throughout the rest of 2016 to advance bilateral relations, namely conducting high-level visits as well as technical exchanges on environmental protection, hydrography and law enforcement, which include the fight against drug trafficking, trafficking in persons and migration fraud.

The two delegations also expressed their intention to sign new agreements to cooperate in areas such as health, agriculture, meteorology, seismology, protected land areas, oil spill response and search and rescue operations, among others. They also agreed to initiate a dialogue on intellectual property and follow up on those regarding climate change and the economic and commercial regulations in force in both countries.

The Cuban and U.S. delegations agreed to hold the fourth meeting of the Bilateral Commission next September in Washington, DC.