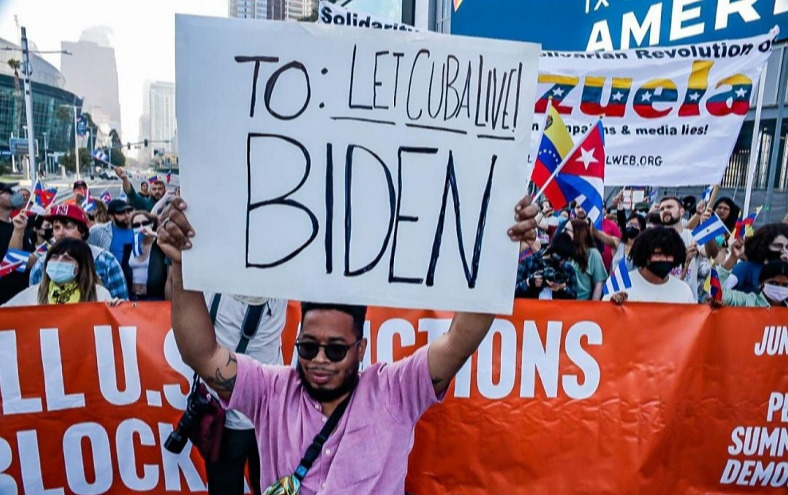 The United States excluded Cuba from the ill-fated Summit of the Americas in the city of Los Angeles, denying it the floor.  But if there is something that cannot be silenced, nor blockaded, it is the solidarity that grows every day towards the Cuban people -- for more than 60 years of a criminal economic, commercial and financial blockade.

The United States excluded Cuba from the ill-fated Summit of the Americas in the city of Los Angeles, denying it the floor.  But if there is something that cannot be silenced, nor blockaded, it is the solidarity that grows every day towards the Cuban people -- for more than 60 years of a criminal economic, commercial and financial blockade.

A solidarity that is multiplying in the United States itself, both among Cubans residing in that territory and among U.S. citizens, and which is materialized in making visible the obstacles imposed by the economic siege and in the sending of invaluable donations.

In the last few hours, a new donation of essential products for liver transplants for eight Cuban children awaiting surgery, which Washington's hostile policy is hindering.

The laws regulating the blockade prohibit Cuba from acquiring this material in the nearby U.S. market, which can make the difference between life and death.

A criminal practice intensified by the United States during the most critical moment of the world health emergency caused by COVID 19. The measures adopted by the now former President Donald Trump even prevented the purchase of pulmonary ventilators, so necessary for those infected by the disease caused by the new coronavirus.

The humanist cargo that has now arrived in Havana was brought by representatives of the U.S. organization Code Pink and the Bridges of Love project, which brings together Cuban emigrants living in the United States.

This is not the first donation of this kind. At the end of last May, Puentes de Amor delivered to the William Soler Pediatric Hospital, in Havana, a part of the chemical compound Custodiol, essential for liver transplants in infants.

Nearly one hundred operations of this type have been carried out in this renowned center in the capital, which specializes in the care of seriously ill children and complex surgical solutions.

The reality is that this unilateral measure, so many times repudiated by the international community, makes it expensive or almost impossible for our country to import material and medicines, many of them with U.S. patents.

This important health program in Cuba has been stopped for two years due to the lack of this chemical compound and now, as a result of this humanitarian gesture, it will be possible to resume it for the benefit of the children who need this surgical intervention.

Organ and tissue transplants are very expensive in the world, but in our country they are performed free of charge and include the subsequent medical follow-up.

According to specialists, only the first day of the postoperative period costs about 40,000 dollars and according to international media, the complete treatment costs about half a million dollars.

The solidarity of Cubans living abroad and U.S. citizens will now make it possible to save the lives of these Cuban children and bring peace of mind and hope to their families.

Once again Cuba is grateful for this new altruistic gesture of the American people and the tireless Bridges of Love project, which also carries out various initiatives in U.S. territory to promote the lifting of the blockade against Cuba and rapprochement between the two countries.