Cuban Mensía stands out in Super 20 of Argentinean basketball 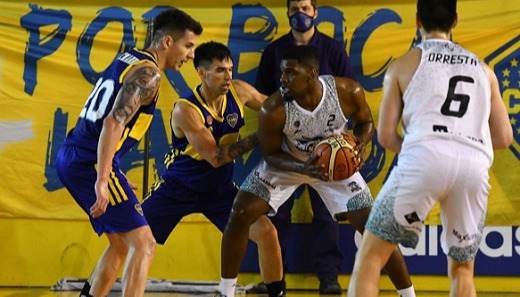 Cuban Mensía with the ball

The espirituano scored 18 points on Tuesday but could not prevent his team's 60-78 defeat when visiting Boca Junior at the Luis Conde stadium in the Argentinean capital during the fourth date of the tournament.

Before in three games won, the Cuban basketball player had among his team the best average of points per game with 23.5 in addition to capturing 18 rebounds, according to data published on the competition's website.

The team led by Martin Villagrán lost the undefeated South Conference in the so-called Bombonerita, where Leonel Schattman had a great night for the home team with 25 points and an excellent shooting performance, scoring seven of 11 shots from the field, including four three-pointers.

Gimnasia y Esgrima started with successes by 94-91 against Hispano Americano, 82-73 at the expense of Argentino and 89-65 against Union, so it now marches as part of a trio with 3-1 balance in group 1 of the southern teams.

This Thursday the Greens close their clashes against those of group 2 against Obras Basket at the Obras Sanitarias stadium, also in the capital of the South American country.

The encounters with those in the same key will take place from October 10 to 16. After the nine games, the two best teams of each group will advance to the quarterfinals to begin on the 28th of that month.

For the North Conference, Instituto, Ciclista Olímpico, Riachuelo, Quimsa and Atenas will play for the first group, and San Martín, La Unión, Comunicaciones, Oberá TC and Regatas Corrientes for the second group.