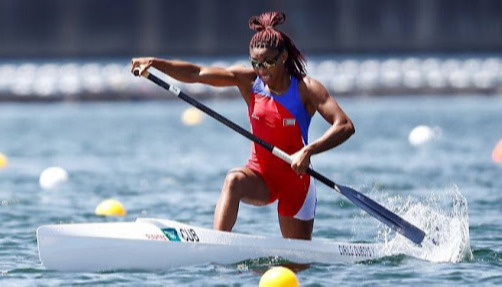 Havana, May 23 (ACN) - The five Cuban canoeists returned to the Polish city of Bidgostia, after winning this weekend two gold, two silver and one bronze medals at the World Cup in Recise, Czech Republic, with a highlight for Yarisleidis Cirilo (2-1-0).

Before competing in the Czech city, the disciples of Yosniel Domínguez (m) and Nelson Perales (f) completed a brief training base, and now they are doing it again, but with their sights set on the World Cup in the Polish city of Poznan, scheduled for next 26-29.

Alejandro Hanze, president and commissioner of the National Federation, told the Cuban News Agency (ACN) that they achieved what was announced regarding the performance of the canoeists, who must continue winning medals and polishing details of the preparation.

In this regard, he highlighted the sixth place (2-2-1) achieved among the 50 countries present with more than 500 athletes, including Olympic and world medalists, according to the site of the International Federation www.canoeicf.com.

In relation to what is planned for the Poznan event, he said that everyone will row in the same modalities and distances, that is the plan since the participation in the Czech and Polish competitions was programmed, he said.

Olympian Cirilo won two gold medals in the single-seater canoe (C-1) at 200 meters and the two-seater (C-2) at 200 meters and a silver medal in the C-2 at 500 meters, together with Khaterin Nuevo (1-1-0), who also participated in the event under the five rings.

Hanze reminded the ACN that in the C-2 500 meters they were only beaten by the Olympic and world champions, the Chinese Xu Shixiao and Sun Mengya, whom they defeated in the preliminary heat that guaranteed them the discussion of medals, which shows that the boat is doing well, he said.

The other medalists for Cuba were Serguei Torres, Olympic champion in Tokyo 2020, but in the C-2 at 1,000 meters, and also Olympian José Ramón Pelier, who won the silver and bronze metals in the direct A final in the C-1 at 5,000 meters, respectively.

Pelier was also in the A final of the 1,000-meter C-1, but finished in seventh place, while Torres was in the B final and finished sixth -fifteenth overall-.

On the other hand, Pelier and the debutant at this level, Tabiani Alvarez, rowed in the final B of the C-2 200 meters, a race in which they finished in eighth place, for a seventeenth place overall.