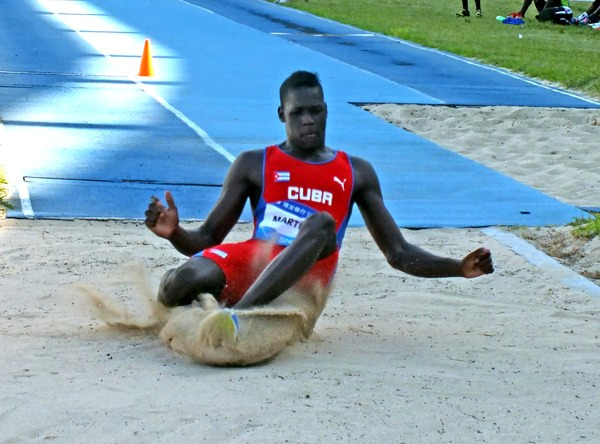 Lazaro Martinez, cadet world champion and junior Pan American champion in 2013, still has a chance to qualify for the Olympic Games in Tokyo.

Havana, July 13 (JIT) -- The Cuban delegation to the Oregon 2022 World Championships in Athletics traveled to the U.S. city of Eugene, where organizers hope to hold the best event of its kind so far, with 15 athletes due to the last-minute injury of heptalonist Yogelis Rodriguez.

The group is headed by world champions Yaimé Pérez, gold medalist in the discus in Doha 2019, and Lázaro Martínez, winner of the triple jump in the indoor event held last March in Belgrade.

In addition, Maykel Massó, bronze medalist in the long jump at the Tokyo 2020 Olympic Games, and Roxana Gómez, finalist in the 400 meters at the same event, also stand out in the group.

The national commissioner of this sport, Yipsi Moreno, confirmed to JIT that all members complied with the required anti-virus-19 medical protocol, which includes the confirmation of a complete vaccination schedule and the smooth completion of PCR tests prior to departure.

The board also informed that heptalonist Yorgelis Rodriguez, who presented discomfort in one of her knees during the hurdles training sessions carried out in the last few days, will not be part of the delegation.

Taking into account the opinion of the athlete and her coach, the criteria of the doctors and the evaluation of the technical commission, it was decided to cancel her participation in the competition.

The rest of the athletes involved are in perfect shape and focused on achieving a good result in the famous Hayward Field stadium.

The organizers confirmed more than 1,900 participants from 192 countries, in what will be the first event of its kind on U.S. soil.

The event will be held in Eugene from July 15 to 24, with 42 Olympic titleholders and 37 world champions.