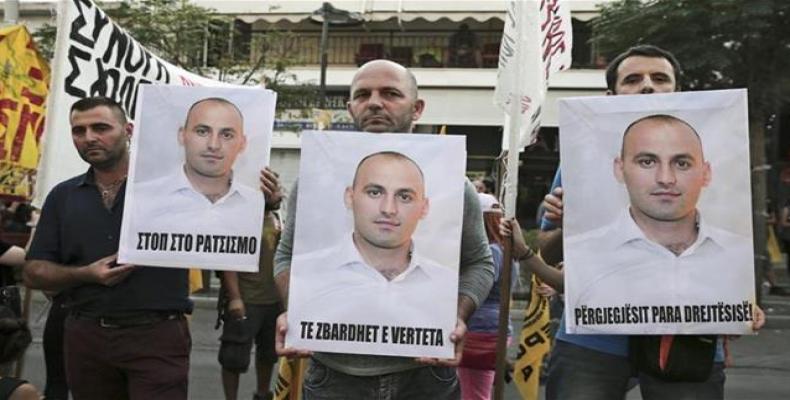 Athens, September 19 (RHC)-- Thousands of demonstrators have taken to the streets in the Greek capital, Athens, to mark the third anniversary of the death of an anti-fascist activist.

Carrying banners and placards, demonstrators marched in Athens's Keratsini district to protest against Greece's far-right Golden Dawn party, which is accused of having been involved in the 2013 murder of Pavlos Fyssas, a 34-year-old anti-fascist musician.

Some reports said violence erupted as a group of Golden Dawn supporters attacked the demonstrators with handmade bombs, forcing Greek police to intervene to counter further clashes. Some participants in the protest rally suffered respiratory problems as a result, and a number of cars, shops and area buildings were damaged.

A 24-year-old protester said he was disappointed because "not all the Golden Dawn neo-Nazis that were somehow involved in the murder of Fyssas are in jail yet."  He said: "Our major problem is with the government, because they still have not done anything about the Golden Dawn supporters that walk among us, in our neighborhoods, undisturbed."

Pavlos Fyssas, who has become a national symbol of anti-fascism in the southeastern European country, died of stab wounds in September 2013.  Giorgos Roupakias, an alleged Golden Dawn Party sympathizer, was later arrested and tried over the murder.

Described by Greek scholars and media as neo-Nazi and fascist, Golden Dawn members have been charged with a series of crimes, ranging from running a criminal organization to involvement in murder and the possession of weapons.