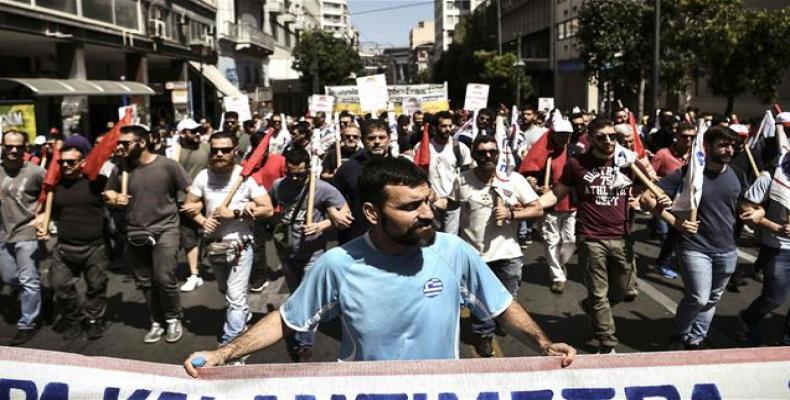 Athens, May 31 (RHC)-- Greece came to a standstill on Wednesday as people staged a nationwide 24-hour strike against reforms linked to a third and final bailout.  Thousands of people protested around the country to mark the labor action.  According to police, about 7,500 people were protesting in Athens as flights and urban transport faced disruption due to the strike, which also hit train and ferry services with the busy tourist season in full swing.

Flight controllers also walked out of work for three hours, causing dozens of flights to be delayed and several others to be cancelled.

The Greek government is concluding the final audit of its third multi-million euro bailout package from the European Union, under the supervision of the International Monetary Fund.  A new bill containing the latest reforms dictated by creditors, including the breakup of Greece's state-dominated energy sector, is to be passed by parliament by June 14th.

Athens hopes that a scheduled June 21st meeting of eurozone finance ministers will also green-light the measures.  The bailout is the third since the Greek economic crisis broke out in 2010. Around 50 general strikes have been held since then.

On Wednesday, the state privatization agency declared the sale of an additional five percent in Balkans telecoms giant OTE to Germany's Deutsche Telekom for over 284 million euros ($331 million).  The German firm already held a 40-percent stake in OTE.

The government plans to pump the new money into the country’s economy, giving it a boost to return to full market financing by August after it crashed eight years ago in 2010.  Critics, however, are weary of the spending cuts, claiming that Prime Minister Alexis Tsipras failed to deliver on his election promise of putting an end to austerity measures.