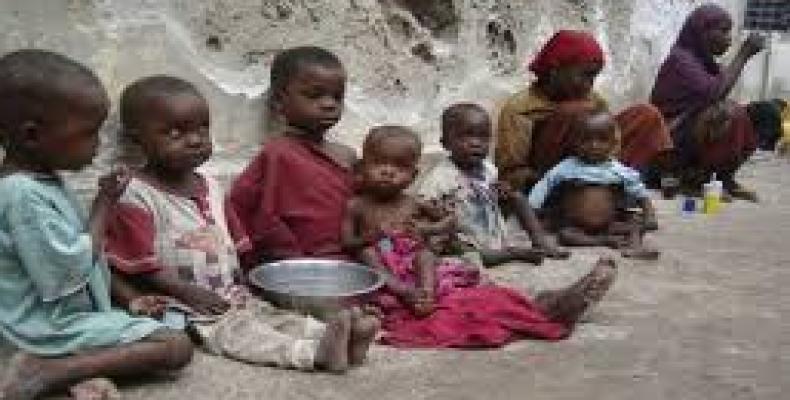 United Nations, September 21 (RHC)-- A new United Nations report estimates that there are five million Somalis that do not have secure access to food as a result of drought and military conflict in the Horn of Africa, with children bearing the brunt of the shortage.

Tuesday’s report said that 300,000 more people are now at risk since it conducted its last study seven months ago.  The five million figure is equal to more than 40 percent of Somalia’s population.

More than 1.1 million people are finding it increasingly difficult to meet their daily food requirements and 3.9 million require intervention to meet their daily caloric needs.  Estimates indicate that 1.1 million Somalians have been displaced by war, 58 percent of whom do not have secure access to food.  Food insecurity contributes to other crises as well, including natural disasters, violence, discrimination, forced evictions and gender-based violence.

Conflict in Somalia has been raging between Somalia’s government and the Islamist group al-Shabab, forcing many to flee to different areas of the country.  Many internal refugees have returned to Somalia because of Kenya’s plan to shut the world’s biggest refugee camp in Dabaab, as well as ongoing droughts in Somalia’s food producing regions.

The United Nations, along with aid organizations, says that humanitarian efforts in Somalia remain underfunded.  "The situation is of serious concern and comes at a time when we are already facing multiple drivers of needs, including drought and risk of flooding, conflict and access constraints as well as increased refugee returns."