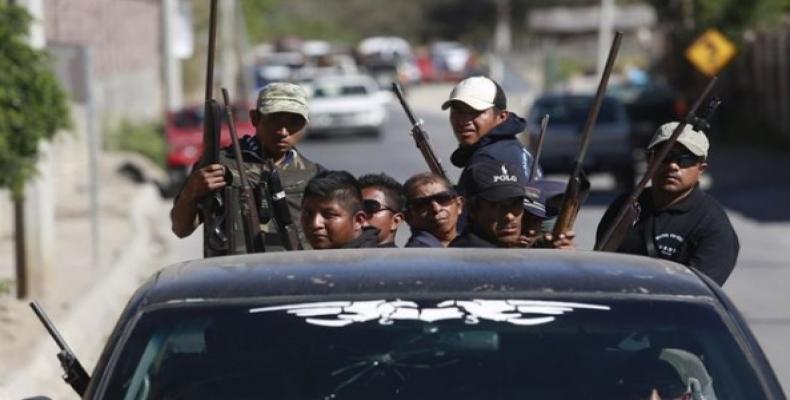 Mexico City, July 29 (RHC)-- In Mexico, surveyed individuals reported feeling unsafe in normal, everyday situations, such as at ATM's, on public transportation, at banks, and on everyday streets.  As violence in Mexico rises month by month, so too does the Mexican people's sense of safety and security.  With June being the most deadly month in the most deadly year in recent Mexican history, polls show that over 70 percent of Mexicans feel unsafe.

According to data from the National Public Security System (SNSP), the past three months in Mexico have seen the highest levels of violent crimes, such as kidnapping, murder, assault, robbery, and extortion, in at least two decades.  A staggering 2,234 intentional homicides were registered in the month of June. The figure indicates an upward trend.  In March, 2,020 homicides were registered, and in May 2,186.

Only halfway into the year, 2017's levels of violence are topping those of 2011 which is so far the most violent recorded year.  Some 9,916 homicide cases have been registered in the first six months of the year, which is five percent higher than the number killed in the same period of 2011.  Social perception of violence and personal insecurity is also on the rise, the June survey by the National Institute of Statistics and Geography showing that 74.9 percent of Mexico's population felt personally insecure in their country, a rise from 72.9 percent in March's survey.

The study showed that women typically feel more unsafe than men, with 80.2 percent of women reporting feeling insecure as opposed to 68.9 percent.

The cities with the highest rates of those 18 and over reporting feeling unsafe were Villahermosa, Ecatepec de Morelos, Chilpancingo de los Bravo, Reynosa, Coatzacoalcos, and Fresnillo.  Around 36 percent of the population also expressed a believe that the situation of violence and insecurity will continue to worsen in coming months.

The majority of violent crimes and homicides go unpunished and unresolved by the state, with rates of impunity approaching 98 percent.  The violent situation in Mexico continues to worsen as organized crime further entrenches itself as a major social and political force.  Civilians face the brunt of the violence as various organized crime gangs fight for territorial control.